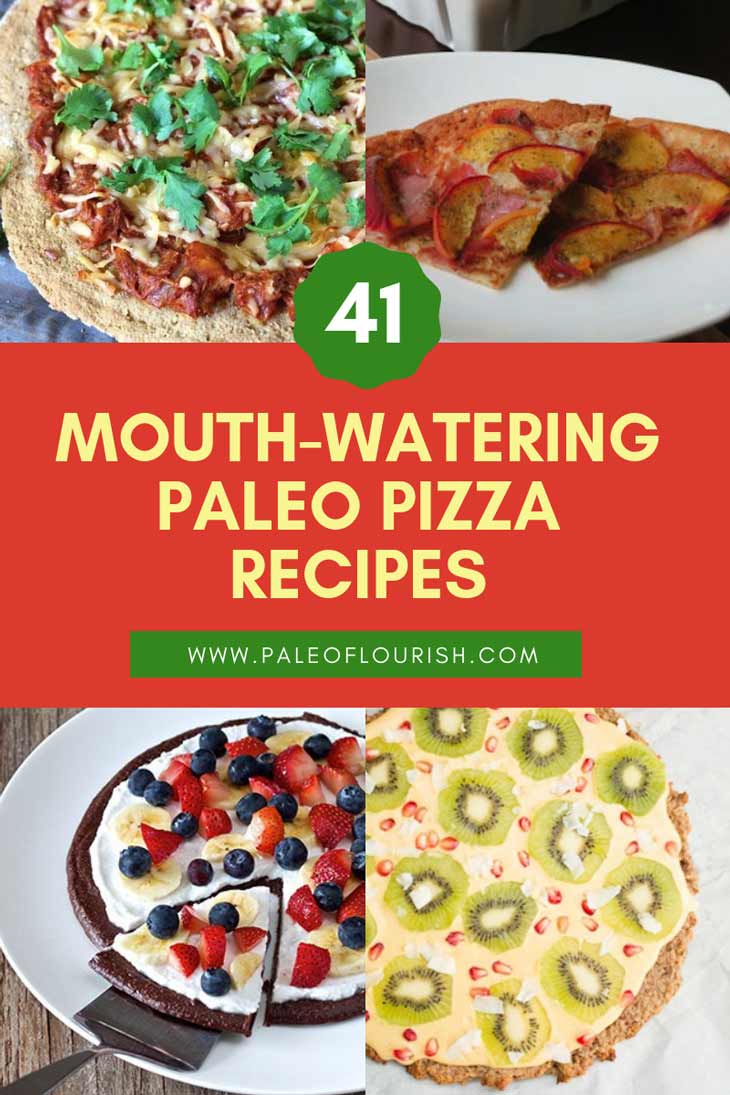 Ah pizza, your favorite treat for a birthday party, slumber party, after party, any occasion really…

There are tons of options for Paleo pizza and our favorite bloggers have all the best ideas. Also for Primal people who allow a bit of cheese in their diet, we have a ton of great Primal pizza recipe ideas as well. Check it out!

The following pizza recipes are truly Paleo; they do not include any cheese or dairy, unless mentioned as an optional topping but certainly not required in any of the lists of ingredients. Also, this section has recipes with your basic pizza crust (made from Paleo-friendly flours). 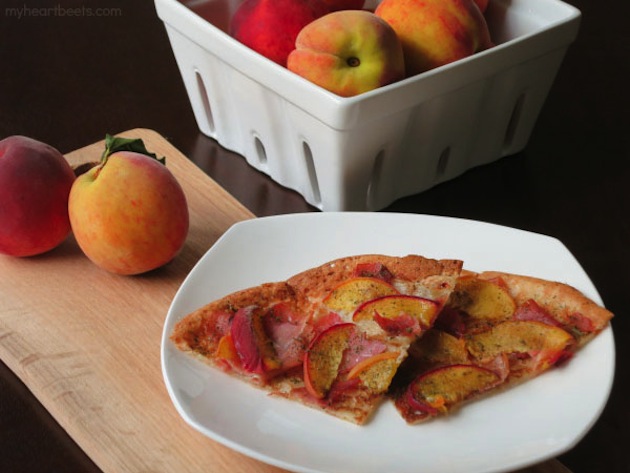 For those of you who like Hawaiian style pizza (i.e. pineapple and ham), this pizza takes that concept and puts it on steroids. I’m not a fan of Hawaiian style myself but a pizza of peach and prosciutto is something I am DYING to try. The crust is made of almond and tapioca flours. (Photo courtesy of Ashley from My Heart Beets.)

This Paleo pizza has a crust made from almond meal, eggs and oil. The special topping is a mix of steak and bacon – talk about getting your protein filling!

The crust for this pizza is made of riced cauliflower and almond meal. The toppings are left completely up to you. Some suggestions are provided but I prefer to use this as an opportunity to get creative or put to use my extra veggie bits and bobs, or leftovers hiding in the fridge.

Lisa at Swiss Paleo touts this cheese-free Paleo pizza as perfection and here’s why. She has found the perfect combo to make a crust that doesn’t taste ‘nutty’ (i.e. too much like almonds). Her trick is to make a mix of yeast, honey and water and add it to the crust mix of coconut flour, almond flour and arrowroot powder. Don’t worry about the yeast, she has done her research and the verdict is that it is Paleo.

You may argue that a calzone is not pizza (more like a pizza pocket), but for the sake of giving you more awesome recipes to choose from, we’ve included it on this list. Paleo blogger Kelly sees it more as a crossover recipe from her cauliflower tacos because her pizza crust here is the same cauliflower-egg-spices mix she uses to make her Paleo tortillas (the recipe is nut-free, by the way). She recommends some optional fillings but consider this another chance to improvise or get creative.

These recipes are pizza adaptations. They don’t include cheese or dairy so are still suitable for the strictly Paleo crowd. The difference is that they don’t have a normal flour crust, but use a vegetable or meat base. 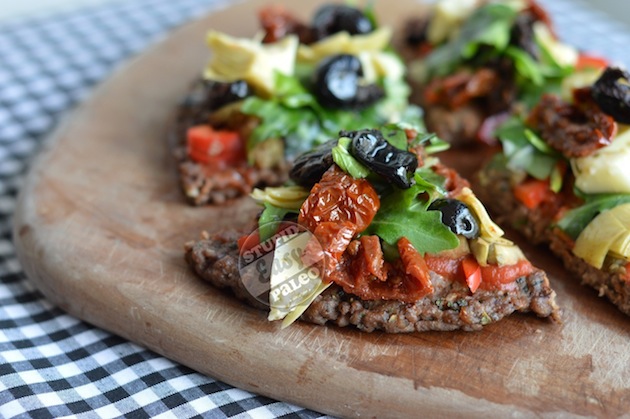 This inventive meatza pie uses ground beef and herbs as a base, making this recipe egg-free. Recommended toppings such as sundried tomatoes and artichoke hearts make this a gourmet option that remains uncomplicated. (Thanks to Steph Gaudreau for letting us use her photo!)

Portobello mushrooms are so versatile. We’ve seen them as replacements for buns in Paleo-friendly hamburgers and now they work as a great pizza base as well.

In our search for the best pizza recipes from our favorite Paleo-friendly food bloggers, we came across plenty of fabulous recipes. The only snag is that several of them had this not-so-Paleo-friendly: cheese! Cheese is a toughy for Paleo people to give up, which is why some find it easier (barring lactose intolerance or other dairy-related digestive problems) to just go Primal. If you’re in that boat, or can make your own vegan cheese as a substitute, check out some of these delicious Primal Pizza Recipes! 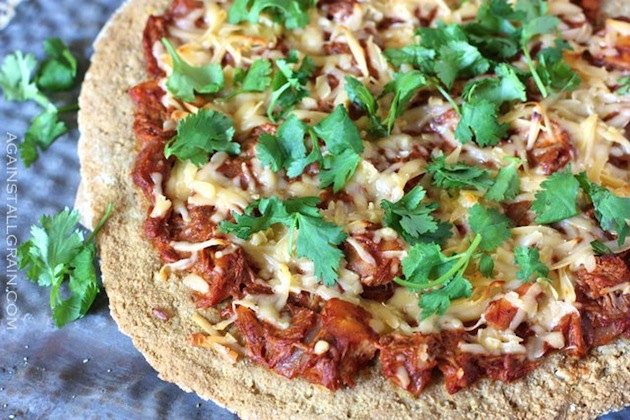 Indian fusion in a pizza? Now we’re talking! I’m a huge fan of international cuisine, especially Indian food. This Primal pizza recipe is a home run. Both the topping mix and crust are full of eastern spices and even though this recipe includes non-Paleo cheese, I still want to urge Paleo people to practice the cashew cream (instructions included) because it’s a great vegan-friendly cream alternative and also similar to but often cheaper than coconut milk. (Danielle and Ryan kindly let us reproduce their image from Against All Grain.)

Whether you’re from Chicago or not, you’ll get a kick out of this deep dish Primal pizza recipe. The crust is made from eggs and almond flour while the toppings include classics like mushrooms, olive and pepperoni. Also, instructions are given for modifying this to a simpler short-stack pizza pie.

This may be the simplest pizza recipe in this entire round-up. The crust is made up of cauliflower, shredded mozzarella and egg. From the photo, the finished pizza looks like something I would have loved as a kid, when I was a very picky eater.

If you want an authentic Italian-style pizza margherita (and vegetarian to boot!) look no further than this classic recipe. The crust has a long list of flavor-boosting spices but the toppings are fresh and simple: sliced tomatoes, basil leaves and that characteristic buffalo mozzarella. YUM!

Here’s another great pizza recipe from Mike of The Iron You. He adapted upon his simple Primal Pizza recipe and created this olive fan favorite. Capers and anchovies are also included.

The capers are back but this time the pizza is takes a completely original spin! With smoked salmon and cream cheese, I’m reminded of bagels with lox in this nut-free Primal pizza creation. What a great fusion!

Another great idea for pizza-for-breakfast, this is actually a breakfast bake (think: pizza-flavored scramble). The recipe list is short though and the process seems pretty simple. A great option for when you’re in a rush!

Rach from Meatified uses a frittata style bed of eggs as a pizza crust for this yummy breakfast pizza option! She adds avocado and cilantro, which make for a wider diversity of flavors and textures.

This stuffed pizza bread reminds me of my favorite cheesy sticks. The bread is made from coconut flour and golden flax meal. The filling keeps it simple with tomato sauce, some spices, pepperoni and optional cheese.

For those of you who prefer more refined flavors (or just like to show off), this recipe’s use of pecorino cheese, Kalamata olives and rosemary-infused crust will not disappoint.

These pizza bites look more like savory cookies with a delicious tomato dip! They are the perfect bite-sized meal to tupper up for a road trip or take along on a long commute.

Using a cauliflower and cheese crust, this nut-free pizza recipe is Hawaiian style (ham and pineapple).

If you have the time on your hands for the elaborate process and varied list of components, this sophisticated pizza recipe with olive and beef toppings will surely wow your guests and loved ones.

The following recipes are more like pizza inspired dishes where traditional flavors and styles have been expanded on and fused to make a variety of kooky and original creations for you to discover. 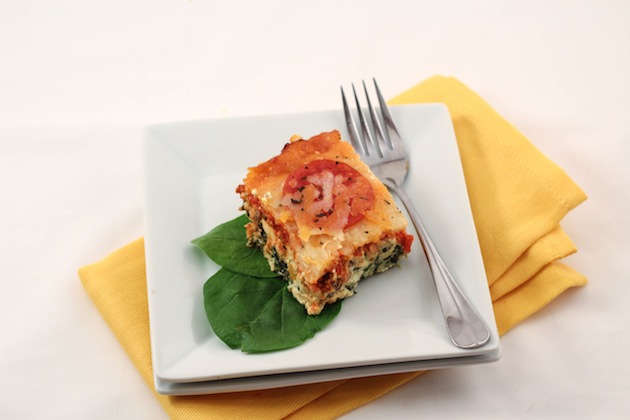 These pizza squares look a bit like lasagna slices and are absolutely jam-packed with several types of cheeses (feta, parmesan, mozzarella AND ricotta!). You can customize the toppings to keep it vegetarian, or go all out with pepperoni and sausage too. (Thanks to Hayley for permission to use the image from her blog, Health Starts in the Kitchen!)

Diverging even further from what we consider a traditional pizza pie, these zucchini-based pizza snacks are actually too simple and tasty to ignore. Low on ingredients but big on flavor, this is a great appetizer or hor d’oeuvre for a dinner party or any other special occasion!

Food blogger Chelsea makes these tasty single serving pizza patties on a bed of yummy Portobello mushroom caps. She cleverly cuts her meatballs in half so that that they don’t fall off these mini pizzas. Why didn’t I think of that?

Now for some special Paleo dessert pizzas to eat after all that Primal and Paleo pizza if you’re having a pizza-themed food fest (or just because you feel like it). 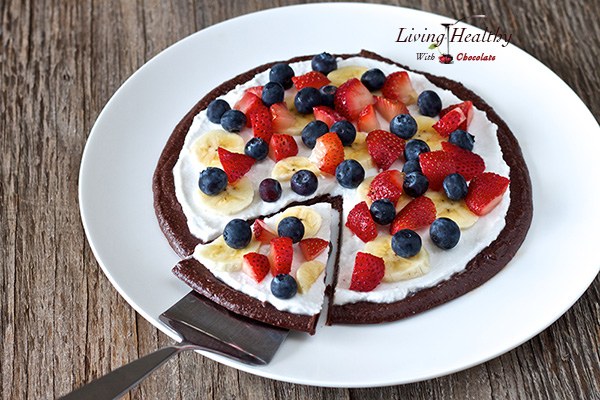 Here’s a great no-bake, dairy-free option for a simple and sweet “Brownie fruit pizza.” Also packed with fruits and citrus, this explosion of flavors is sure to satisfy the sweet tooth. (Photo reproduced with permission from Adriana of Living Healthy with Chocolate.) 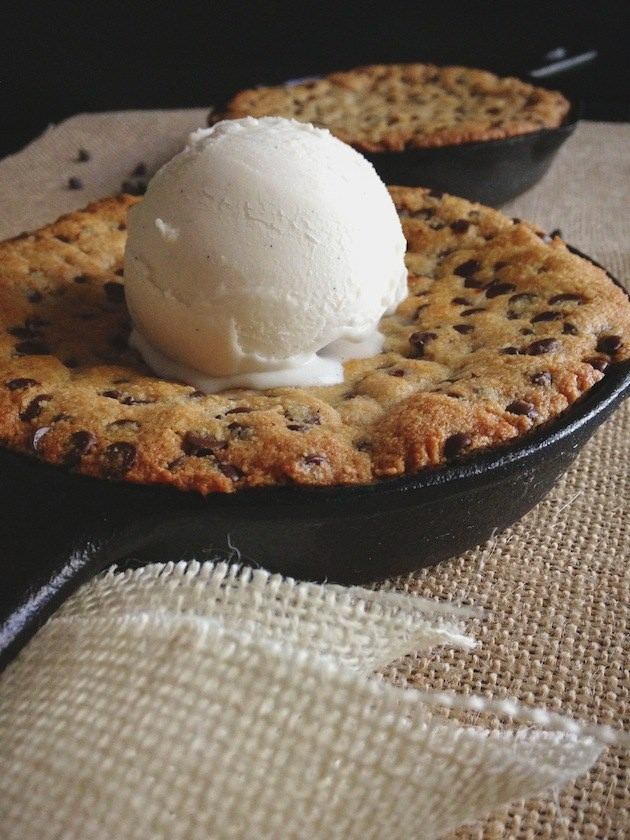 I’m cracking up at the name given to this marriage of a pizza and cookie! This giant cookie-turned-pie is crazy but not complicated, and a big hunk o’ vanilla ice cream on top looks perfect, as long as the whole thing is going to get gobbled up at once (otherwise it may turn into a soggy mess). Food blogger Vanessa recommends customizing it with your choice of nuts as well. (Thanks to Vanessa for permission to use her photo from her blog, Clean Eating with a Dirty Mind!) 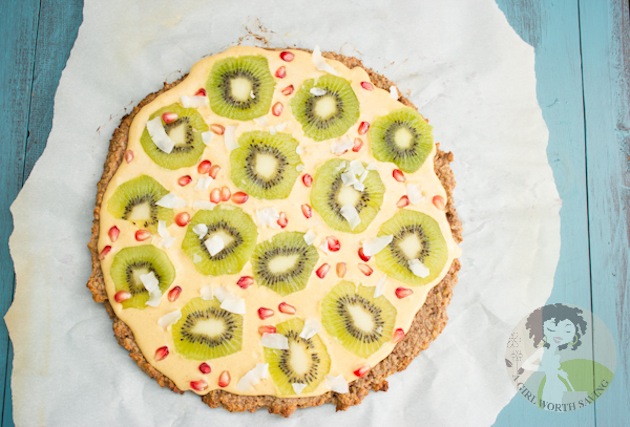 Kelly Bejelly does Paleo and Primal desserts like no other. The dates need to be soaked for 8 hours so start this one the day before. Other than that, try not to feel daunted by the comprehensive ingredient list. The instructions to make this beautiful pizza-shaped dessert are really nothing tricky. (Photo permission from Kelly at A Girl Worth Saving. Thanks!)