What’s the Difference Between a Paleo and Gluten-Free Diet? 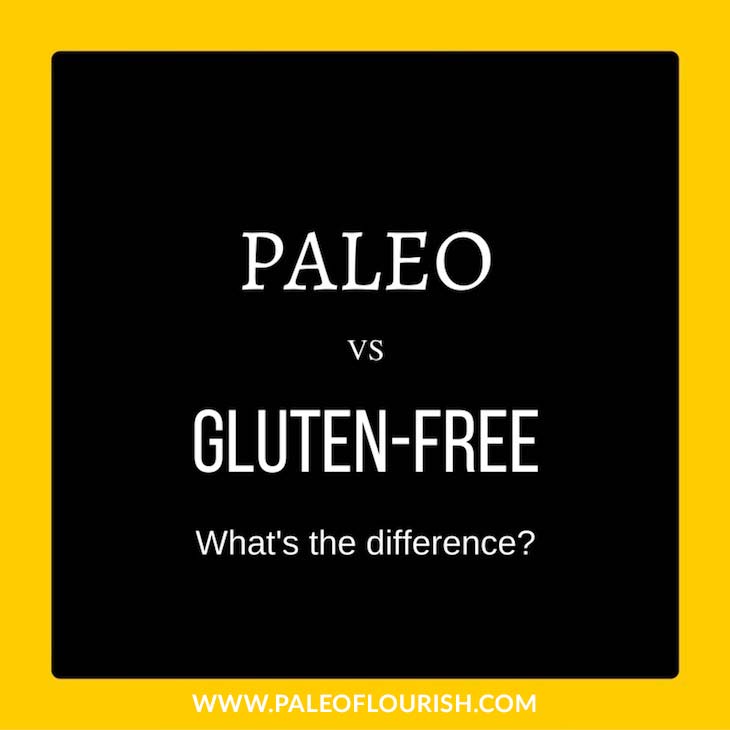 I’ve often gotten asked what the difference between a Paleo and Gluten-Free diet is, and so in this post, I hope to get across to you the main differences as well as why I think Paleo is generally better than GF despite some similarities.

There’s also an infographic down below – please feel free to pin or embed it on your own website.

I’ll start by quickly defining each diet, and then the section after that will list the main differences between Paleo and Gluten-Free.

What is a Gluten-Free Diet?

Generally, most people who are on a gluten-free diet just avoid gluten. So you’ve probably seen in health food markets or even in your local supermarket tons of packaged foods labeled gluten-free (or GF). What that means is that they don’t contain the protein called gluten, which is found in grains like wheat, barley, rye.

Often, instead of wheat, these gluten-free products contain other grains. So, gluten-free bread may be made from rice flour instead, and to make up for the taste difference, gluten-free packaged goods often contain additional sugar, preservatives, coloring, seed oils, etc.

I know this is a generalization since many diets, including Paleo, Primal, and most versions of low carb or keto are also gluten-free diets. And healthy kale chips can labeled gluten-free too.

But, gluten-free just means no-gluten. It doesn’t necessarily mean anything else. And while gluten is probably problematic regardless of whether you’re celiac or not, it’s not the only food that could be problematic to your health and weight. 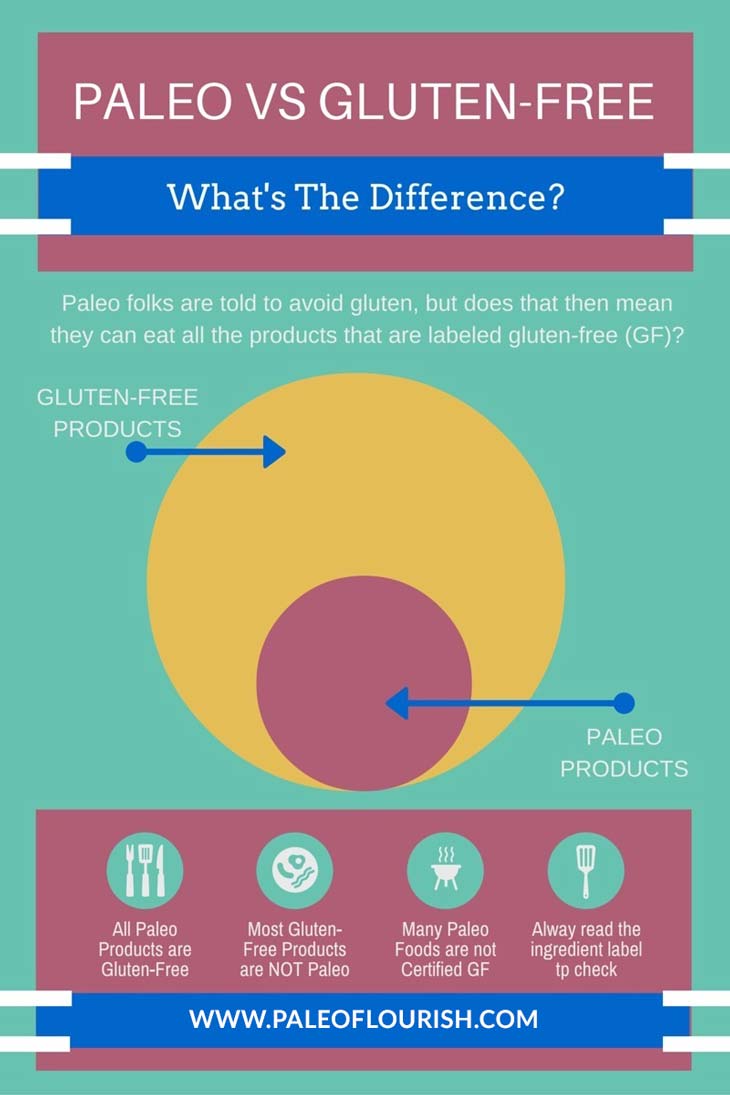 What is a Paleo Diet?

The Paleo diet started off as a diet based off what humans ate in prehistoric times – the premise was that if humans have been thriving on those foods for so many millennia, then we must be adapted to eat it. And foods like wheat have entered our food systems very recently when you compare it to how long humans have been in existence.

Often, the Paleo diet is compared to that of more recent hunter-gatherer tribes, who ate grain-free diets.

In the strictest form, a Paleo diet eliminates all grains (not just the gluten-containing grains), all legumes (including soy and peanuts), all processed sugars, all seed and vegetable oils, and all dairy.

In more practical forms, Paleo eaters use what our ancestors ate as an initial model and then also look at the modern science behind a food to evaluate whether its health benefits and practical concerns outweigh its health downsides. That’s why foods like white rice, potatoes, and foods like ghee, raw milk, and gluten-free tamari soy sauce are considered OK by most Paleo eaters.

Lastly, while Paleo is considered a diet by many, it does also have a lot to say about the importance of sleep, de-stressing, and exercise.

What’s the Difference Between a Paleo and Gluten-Free Diet?

Here’s an infographic to illustrate the difference between a Paleo and Gluten-Free diet – feel free to pin this and share it. If you’d like to embed this infographic on your website, please use the embed code below in order to credit us for our work. 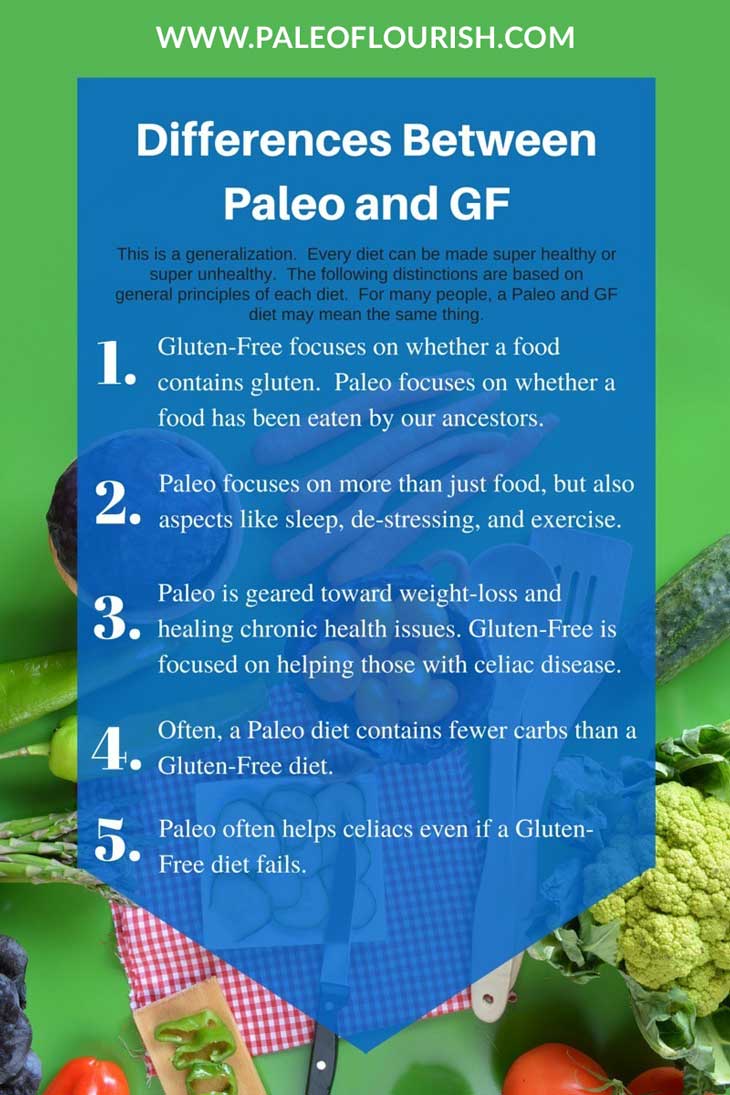 Read the full article on Paleo vs Gluten-Free here.

Just a quick note – I know there are many different versions of a Paleo or a Gluten-Free diet, so the differences listed below are generalizations.

The main differences between a Paleo and a Gluten-Free diet:

Paleo advocates for the elimination of grains, legumes, dairy, processed sugar, and seed oils. For a more detailed list, you can download our Paleo diet food list here.

2. Paleo focuses on more than just food, but also aspects like sleep, de-stressing, and exercise.

It’s generally described that people in the very distant past slept more (during hours when there’s no sunlight and no electricity), weren’t as stressed (because there weren’t so many modern day stressors like mobile phones, social media), and people walked and lifted heavy stuff a lot. Because Paleo incorporates these concepts, Paleo is often described as a lifestyle rather than a diet.

3. In general, Paleo is more geared toward weight-loss and healing a variety of health issues, whereas Gluten-Free is focused on helping those with celiac disease.

While many people also go on a gluten-free diet for weight-loss, in general, Paleo is more known for being a weight-loss and anti-inflammatory diet.

4. In general, a Paleo diet contains fewer carbohydrates than a general Gluten-Free diet.

This is because Paleo cuts out most foods that are naturally high in carbs, e.g., grains and legumes. However, as Chris Kresser points out, “Paleo does not equal low carb.”

5. Paleo often helps celiacs even if a Gluten-Free diet fails.

While a GF diet often helps those with celiac disease, some find that it’s difficult to heal their gut when they’re also introducing other foods that could be causing damage to their gut.

And often Paleo also helps people who aren’t diagnosed as celiac with a variety of symptoms.

An important note to celiacs: While Paleo eaters stay gluten-free most of the time, many of them don’t have huge incentive to avoid small amounts of gluten in foods like a sauce accompanying a dish at a restaurant or a stir-fry dish that uses regular soy sauce instead of gluten-free tamari sauce.

For example, I really enjoyed eating at Mums, a restaurant in Edinburgh that serves gluten-free sausages. However, when I recommended it to a gluten-free friend, I realized that I had no way of guaranteeing that the food there wouldn’t be contaminated with gluten since I don’t feel any symptoms from small amounts of gluten. Luckily, he was pretty knowledgeable and tested it out himself and found that he also didn’t suffer any symptoms. So, while Paleo is gluten-free, it might not be as gluten-free as you might need it to be.

Why is Paleo healthier than Gluten-Free?

In the end, you can make every diet healthy or unhealthy. You can eat Paleo brownies laden with almond flour and honey daily or you can eat GF bread made with rice flour, and both would not be great for your health or weight. Or you can eat a gluten-free diet filled with fresh vegetables and grass-fed beef and be healthier than most Paleo folks.

What I’m getting at is that whether you label your diet and lifestyle as Gluten-Free or Paleo doesn’t really matter. What matters is what you actually put into your body.

Whether you label your diet and lifestyle as Gluten-Free or Paleo doesn’t really matter. What matters is what you actually put into your body!

Click to TweetPersonally, I find sticking to a Paleo lifestyle helps me eat healthier as it means I can automatically say NO to pretty much all prepackaged food. This just decreases my likelihood of eating junk. And if I do want something sweet like a muffin, I have to take the time and effort to make it myself.

Thank you Louise. Great article & nice infographic. Now i can understand clearly the different between both of them. Do you think that we should pay higher for gluten-free foods & supplements?

A good article that distills the differences between the two diets. Thank you.

Hi, i am confused i thought white rice and potatoes were not paleo.

White rice and potatoes are not considered strictly Paleo but many people consider them safe starches for those without autoimmune issues, weight loss or blood sugar issues.

Great article and info, I follow the Paleo lifestyle as well and find that if I just sub a sweet potato and eat brown rice-they even have brown rice spaghetti now!- I don’t feel like I’m missing out on anything.