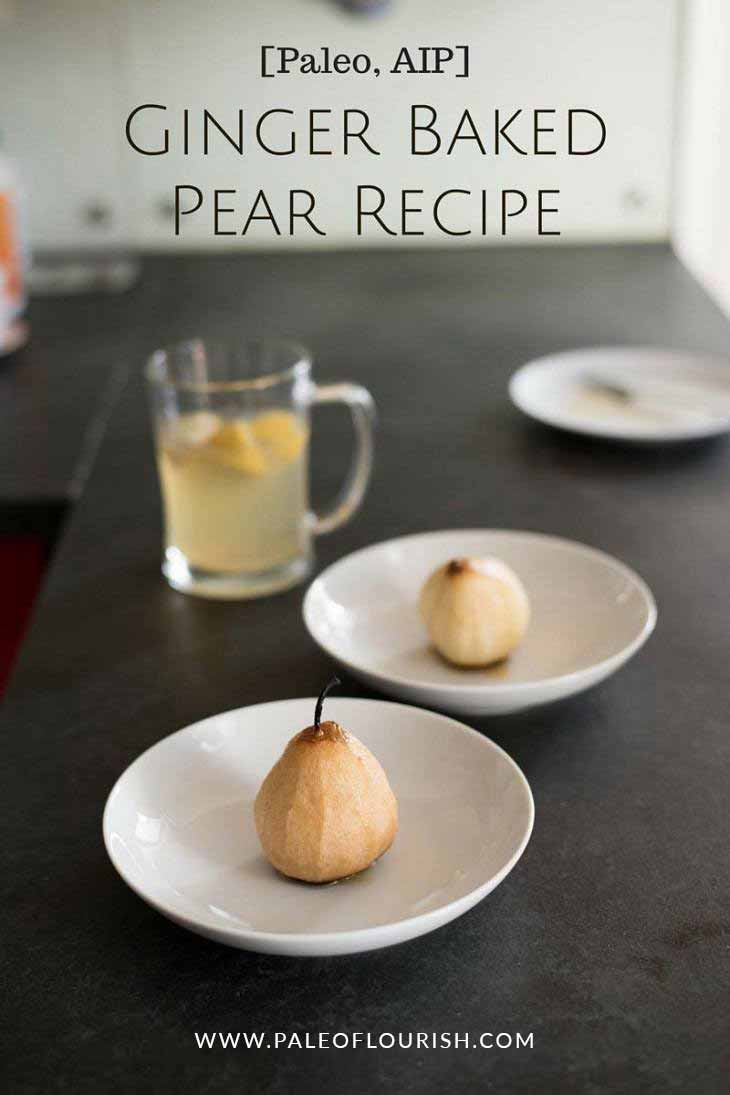 I first had baked pear for dessert at Alison Golden‘s house several years ago, and I was recently reminded of it again when I had a similar dessert at a restaurant in Porto, Portugal.

Baked pears are actually really easy to make but they are a fancy Paleo dessert that will wow people. Most baked pear recipes use autumn or winter spices like cinnamon and nutmeg, but I found the addition of ginger really helped to make it an anytime dessert and keep it AIP-friendly. There’s a very light spiciness that enhances the sweetness from the pears and the honey coating.

Many baked pear recipes are also made using pear halves, but it’s way easier if you don’t have to cut up the pear and hollow out the core. (I like keeping recipes easy!)

A few notes about this baked pear recipe:
This baked pear recipe doesn’t require much preparation, but it does need a full hour in the oven for the pears to get properly soft. I’ve seen some recipes (like Jamie Oliver’s) require less time in the oven, but I find the pears taste so much better when they’re tender and soft (unless of course you’re using super ripe and soft pears to begin with). So, if you’re making this for dinner, make sure you start it well in advance. You can of course, also serve this dish chilled instead of straight out of the oven. That’s how the restaurant served the baked pear dish I ordered.

This recipe is both Paleo and AIP-friendly (Paleo autoimmune protocol), but it’s also a fancy dessert that’s often served at upscale restaurants, so it’s perfect if you want to impress your family or guests!

Mix together the honey, coconut oil, lemon juice, and ginger powder in a small cup or bowl. Meanwhile, preheat your oven to 400F (200C).

Peel the Bartlett pears (also known as Williams pears) – I used a potato peeler for this.  If you can’t find this type of pear, feel free to use whatever pears are available near you.

Make sure each pear can stand up (i.e., it has a flat bottom) on a flat baking tray. If it can’t stand up properly, then use the knife to slice a layer off the bottom of the pear so it’s flat and can stand up. 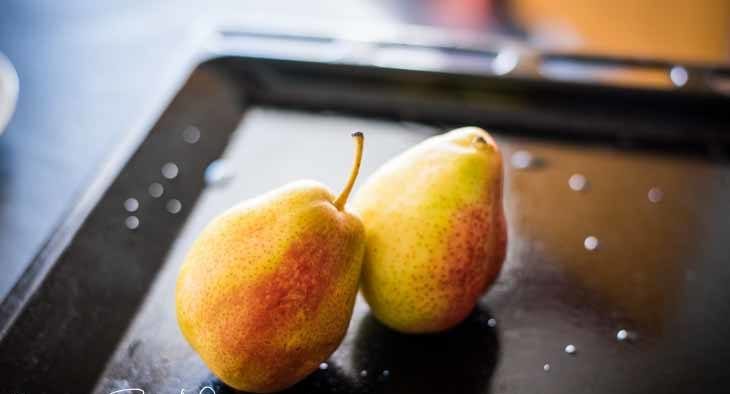 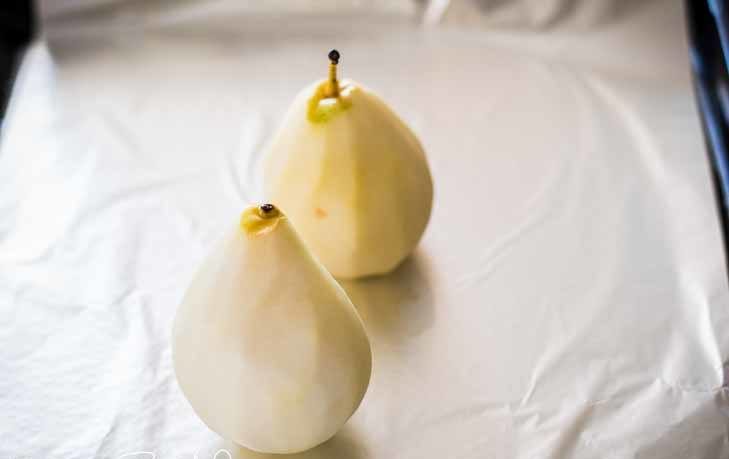 Then line a baking tray with aluminum foil. Cover each pear lightly with the mixture (using approx. 1/4 of the mixture). And then place the pears on the lined baking tray. 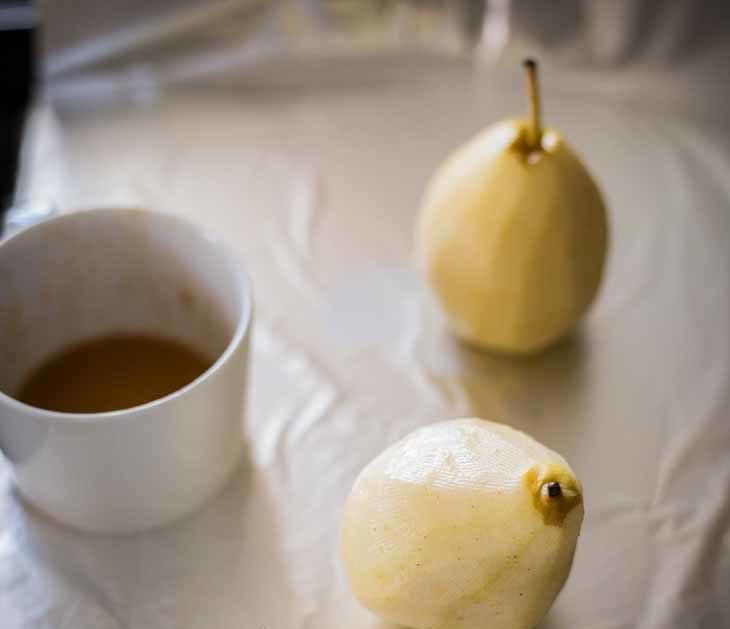 Place the baking tray with the pears into the preheated oven and bake for 1 hour total. After 15 minutes and 30 minutes, use a spoon to coat more of the mixture onto the pears. Save a small amount of the mixture to serve with. 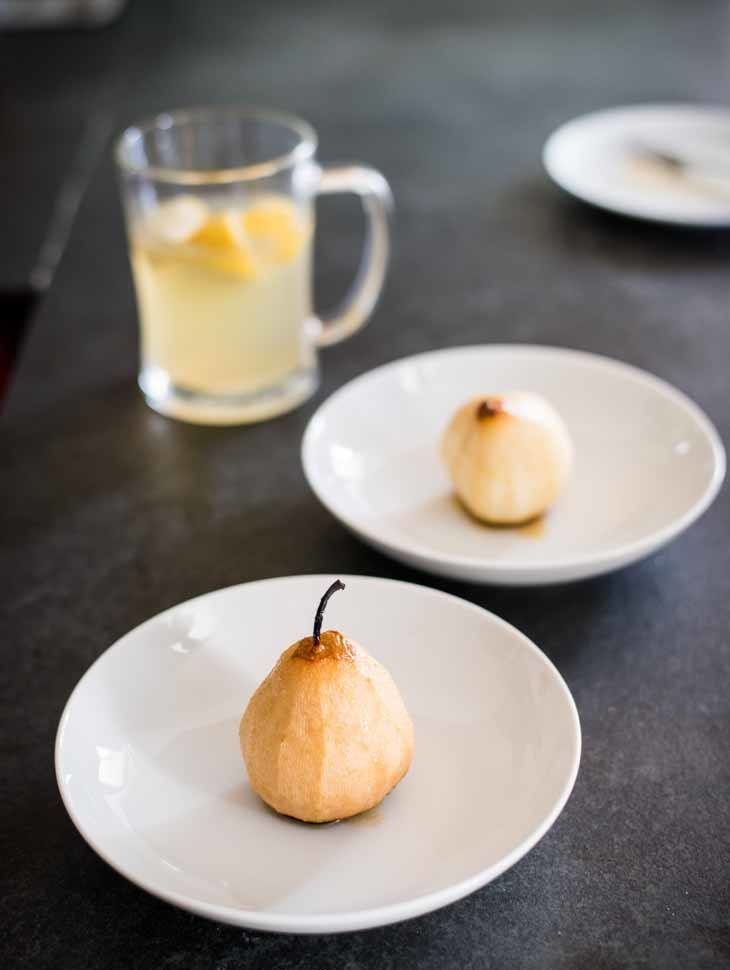 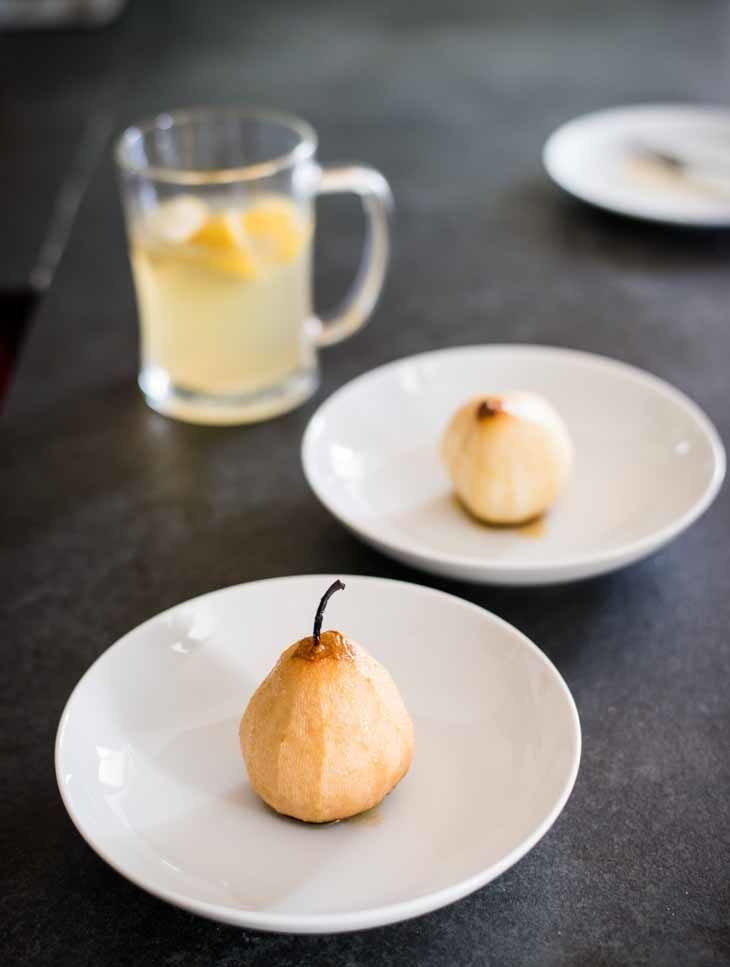