Is Oatmeal Paleo? (Don’t take away all of my breakfast foods!) 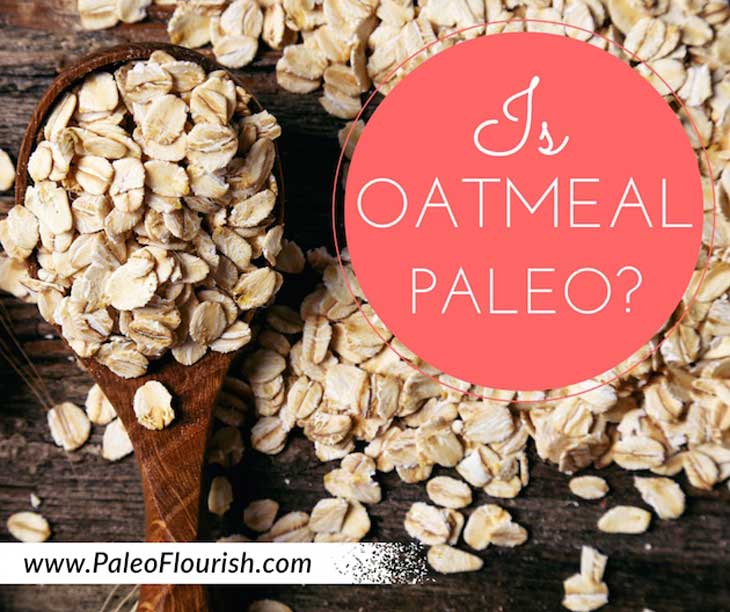 Most of us have sampled some sort of oatmeal creation in our lifetime, whether it’s cookies, oatmeal in the morning, or a family recipe for baked oatmeal squares.

In fact, many people tout oatmeal as one of the best breakfast foods for you. Should we follow along and grab a bowl of oats every day, or should we be a bit more cautious about adding oatmeal to our daily Paleo lifestyle?

When you think of oats, you probably don’t think of true oats. You likely envision something called “rolled oats,” which are the most common variety.

In their original form, the cereal grain oat is called a groat, and you’re most likely to find it in horse feed (though sometimes people still eat it for breakfast). It’s still got the bran—that husk part of the plant—and it’s largely untouched between harvest and consumption.

Rolled oats, on the other hand, are groats that have been steamed and rolled out, with the bran removed.

This is the kind you’d eat in oatmeal; they look like little ovals with a straight line down the middle.

Oatmeal definitely has some desirable qualities. Rolled oats are high in manganese, which helps the blood to clot and regulates metabolism, and you can also find a good helping of phosphorus, which plays a part in keeping our bones strong and healthy.

Because of the fiber levels, many folks also encourage consumption of oatmeal because they say it reduces serum cholesterol levels.

However, in the end, oatmeal still isn’t very nutritious in the grand scheme. When compared to most classes of Paleo foods (seafood, meats, veggies, nuts, etc.), grains fare very poorly, just like all other grains. That’s not a reason never to eat a food, but it’s a good reason not to make it a staple of your diet that you eat every day.

In addition, like most other grains, if you have any sort of gut issues (leaky gut, dysbiosis of microorganisms, IBS, bloating, etc.), then oats tend to exacerbate those problems and prevent full healing. There are a variety of possible reasons for this. Among other things, oatmeal is also being studied as a dietary contributor to inflammation.

In addition, the phytates contained in oats partially inhibit the absorption of minerals through the intestinal tract. What that means for you is that your body can’t absorb many of the nutrients in oats because they’re bound to phytic acid.

In the end, oats are not the worst thing you can eat by any means, and if you’re quite healthy, then you may tolerate oatmeal perfectly well. But it’s not an ideal food.

Amy Kubal says: “If you are asking [if a food is Paleo] because the food is something that you ‘want’ someone to tell you is okay to have even when in your mind you know it’s not paleo – don’t ask. This often applies to…oatmeal.”

Mark Sisson says: “Oatmeal is a perfect example of the essentially tasteless, but oddly comforting food that’s difficult to give up (judging from all the emails I get). It’s tough to explain, because it’s not like oatmeal is particularly delicious. It’s bland, unless you really dress it up. Better than wheat, worse (and more work to improve) than rice. There are numerous other food options that are superior to oats.”

However, oats are not as bad as wheat, and eating them every once in a while isn’t going to cause much harm for most people.

But why bother? There are a lot of other, better options you could be eating instead of oatmeal (try sweet potatoes if you want starch!).

For a Paleo granola, try this recipe.

And for some more Paleo breakfast recipes, check this cookbook out.