A lot of paleo people love tamari sauce, but what is it and is it actually paleo?

What is tamari sauce? 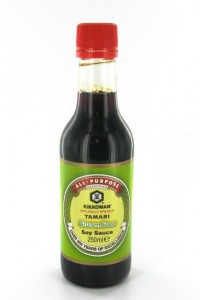 Originating in Japan, Tamari sauce is just a form of soy sauce that has always been made without wheat or anything else containing gluten.

(Note, however, that there are some brands of tamari that contains wheat, such as the Kikkoman tamari soy sauce, which has both wheat and glucose in the ingredients!).

Tamari sauce is typically darker in color and has a richer, less salty flavor than your average soy sauce. Sometimes a little bit of alcohol is also added to tamari sauce to help preserve it.

Despite its slightly different taste and color, tamari sauce can be used in any recipe in place of soy sauce.

The word tamari is derived from the Japanese word, tamaru, meaning “to accumulate.” This is because tamari sauce is actually the run-off liquid produced while making miso (think miso soup served in Japanese restaurants).

Strictly, no, since soy sauce is not strictly Paleo.

But as with all soy sauces, if it contains nothing other than water, soybeans, and salt in the ingredients list, then it’s likely to not be that bad for you if you don’t use it too much or too often.

However, regardless of whether you’re buying a tamari sauce or any other type of soy sauce, you should always check the ingredients list to make sure it contains no wheat, rice, colorings, preservatives, or any forms of sugar.

If you want some tamari sauce to spice up your food, we recommend these:

For a thorough discussion of whether soy sauce is paleo, see this article:
Is Soy Sauce Paleo?

Do You Use Tamari? What’s your favorite brand? Let me know in the comments below!