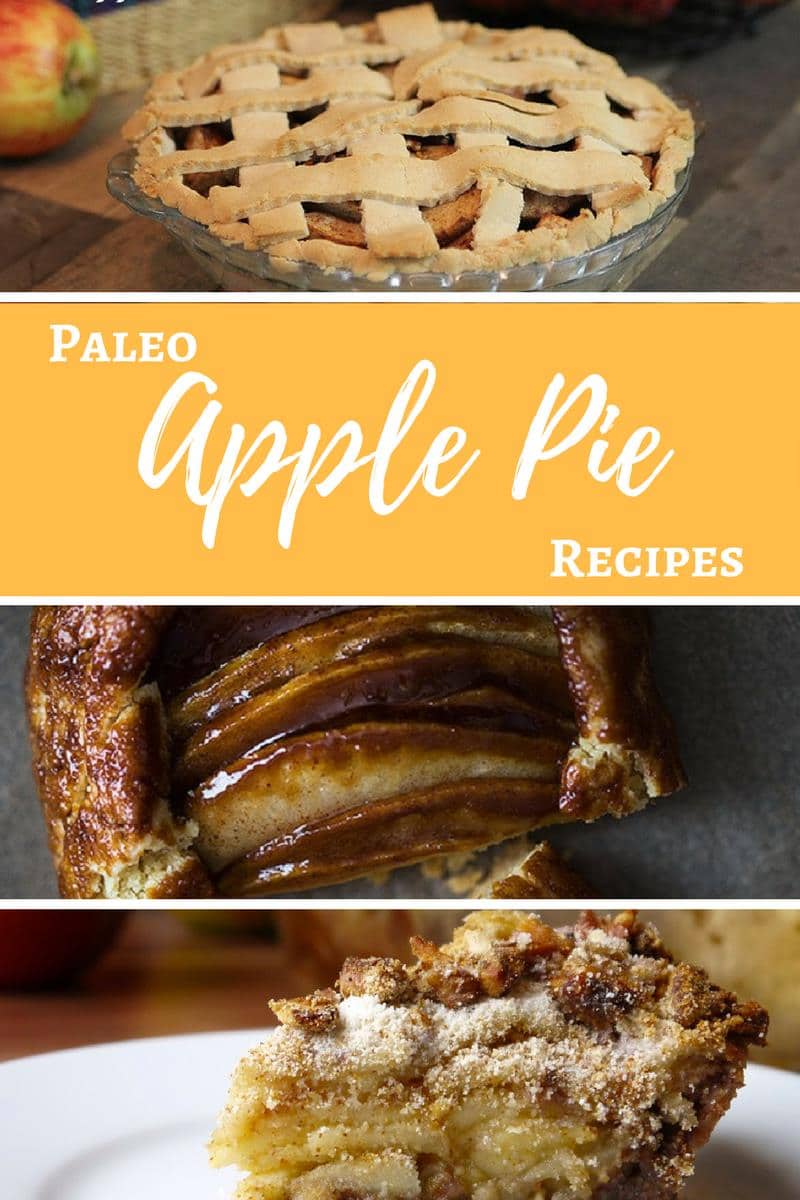 While we typically think of apple pies as traditionally American, the first apple pies were made in England as far back as the 14th century!

And the form of apple pies have changed dramatically over the centuries. Initially, they didn’t even have pie shell and didn’t use added sugar.

Apple pies have evolved even more in the past few decades with apple pie flavored foods popping up everywhere (there are even apple pie scented candles!).

So, if you’re an apple pie fan, then don’t worry you don’t have to miss out on your favorite dessert on a Paleo diet.

Below you’ll find a large selection of Paleo apple pie recipes – some are in the traditional pie form while others are in bar form or even in smoothie form! Use the table of contents below to browse or click the green button below to download this entire list so you can try all your favorites later. 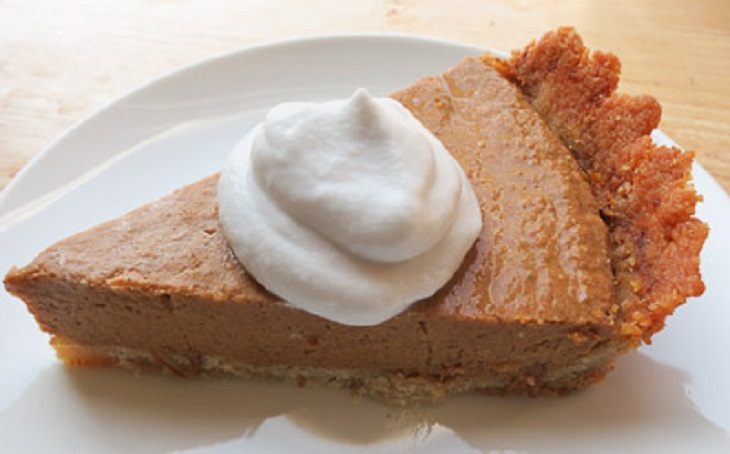 This pie looks indulgent and delicious! With a lovely nutty crunch from the crust and a mellow sweetness from the maple syrup, this is a perfect way to serve apples. I prefer to leave the filling tasting a little tart, although you can judge the sweetener for yourself. If making your own apple butter, make sure it is nice and thick. This makes a great dessert when entertaining!

Apple pie has been a favorite in almost every household for many years, so this one is based on the traditional taste. You might find the crust a little challenging to roll out, but persevere! Any holes in the pastry can easily be pinched together to cover the tin. You can use Granny Smith apples if you like a zingy flavor, or try Gala if you prefer the fruit to have more sweetness.

Fennel with fruit might sound a bit strange, but fennel has a subtle flavor and compliments this pie really well. If you use sweet apples, along with the candied ginger, it might be a good idea to taste the filling before you add any other sweetener as it may be sweet enough. Instead of the crumble topping you can easily put a pastry crust on top, although on chilly evenings the thought of apples and crumble gives a very warming feeling!

This is another recipe that shows how well spices and apples go together and using cloves and cinnamon gives the pie the taste of celebrations like Thanksgiving and Christmas, although it tastes just as good at any time! Because you are filling this pie with slices rather than chopping the apple, when you cut into it the filling looks very professional, so would be a good choice for serving when entertaining friends. 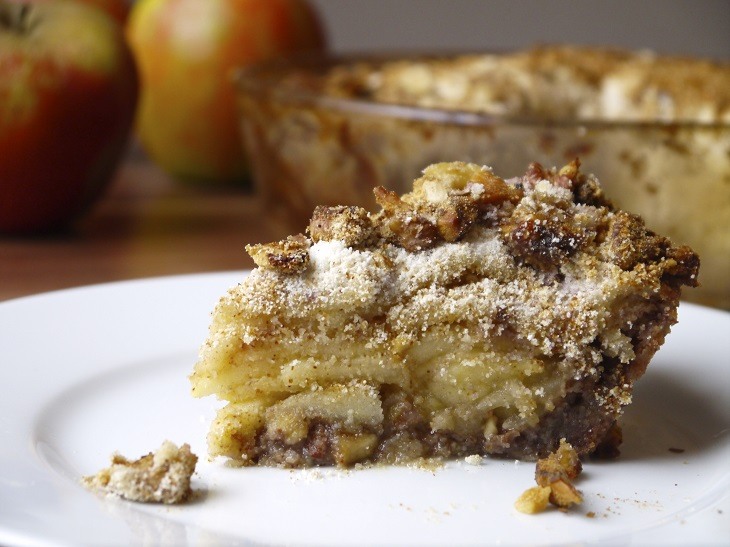 If you like traditional pumpkin pie then this recipe is a must try. It has a wonderful crunchy crust that does not need to be pre-baked, and the filling is smooth and delicious. Because the crust is a vegan one, you might find it a bit hard to work with, but a handy tip is to roll the pastry out between sheets of baking parchment – this stops it sticking to the rolling pin. This is a recipe option you could try instead of the traditional recipe you use for Thanksgiving. 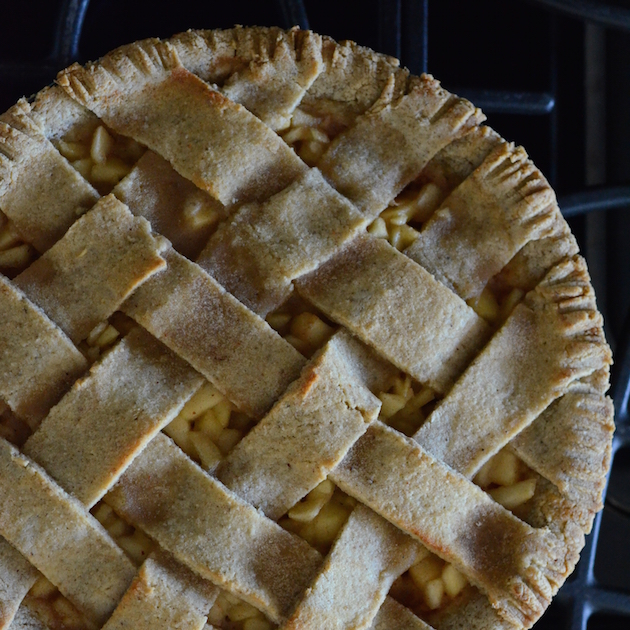 Paleo pastry can be notoriously awkward to work, but why not try this handy tip? Adding chia flour helps to give you enough stretch in the pastry to make it easier to work. Do not panic if your pie lining has holes or gaps – just patch them with pastry trimmings and no-one will notice! Based on traditional apple pie fillings, this recipe gives the warming, comforting flavor that we all expect from an old favorite!

The main difference with this pie is that it does not have a pastry base or top, so is great for avoiding the stresses of working pastry if you find it a challenge! The delicious nutty, crunchy topping gives you a lovely contrast to the sweet and fruity filling. This recipe uses walnuts in the topping, but you can feel free to use your favorites instead. A great addition to your grain and gluten-free recipe collection!

Apples are available all year, but if you get the chance to visit a farmer’s market in the fall, you can pick up great bargains on some great flavors. Granny Smith apples have been used in pies for years, but you can experiment with your favorites, or try a new variety! The recipe for this pie is not unlike others you might have tried, but it uses sea salt in the topping which gives a fantastic contrast to the sweet filling. 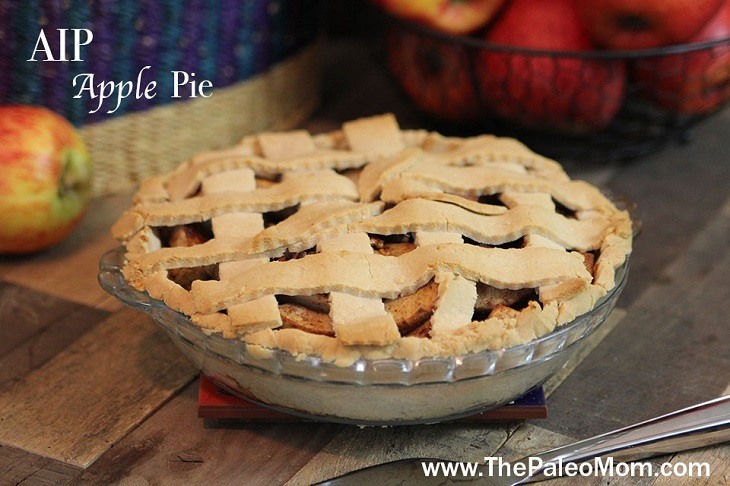 This apple pie recipe contains quite a few spice flavors, all of which compliment the apples perfectly. The lemon juice and zest give a zing to the overall flavor, but reduce the amount if you are not too keen on citrus. If you decide to use a crosshatch pattern for the pastry crust, it is really impressive and looks as if you put a lot of effort in – great if you are having a dinner party – but you can use a flat pastry top instead. 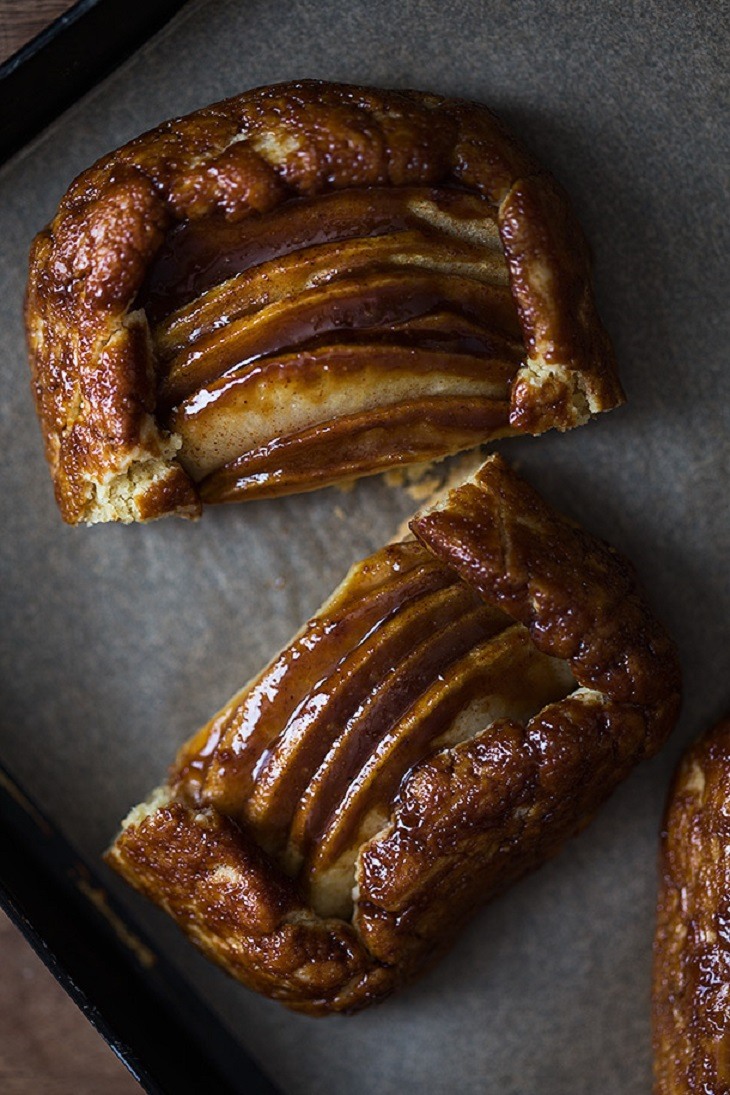 These little tartlets look and smell amazing and would be really good for when you have friends round. The salted caramel glaze compliments the flavor of the apples so well and will leave you wanting more! When you are making pastry with butter it helps if it has been chilled first as this makes it easier to cut into the flour. 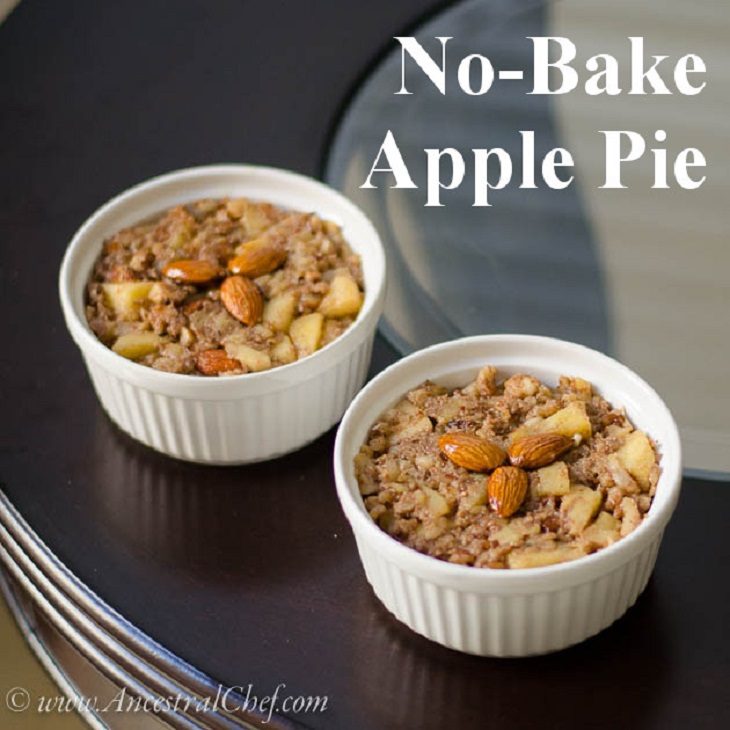 If you have never thought that there could be a quick recipe for apple pie, then think again! These can be made in just over 30 minutes! They look so appetizing and very impressive for dinner guests. As with other recipes you can use whatever apples you have, or try using different types to create your own favorite flavor. If you don’t like the almonds on the top, they can look just as good with a walnut instead.

Who could resist the thought of individual apple pies dipped in caramel sauce? Or you could try drizzling the sauce over the top before serving. These little tasty treats can be fun to make and are a great way to involve the kids in preparing them. Even if theirs don’t turn out perfect, at least you had fun trying! Once the pies are cooked you can enjoy them right away, but be careful if you are giving them to the kids – remember that cooked fruit can be super-hot – so maybe let the pies cool a little first.

These amazing bars look so delicious, especially with their sticky caramel sauce! This recipe gives you the chance to use any variety of apple you like, or all of them! The bars have a soft texture and are packed with the flavours of apple pie and are suitable for serving any day, any time! Don’t be tempted to eat these piping hot – let them cool a bit and the flavour of the apples will be even better.

– Beauty and the Foodie 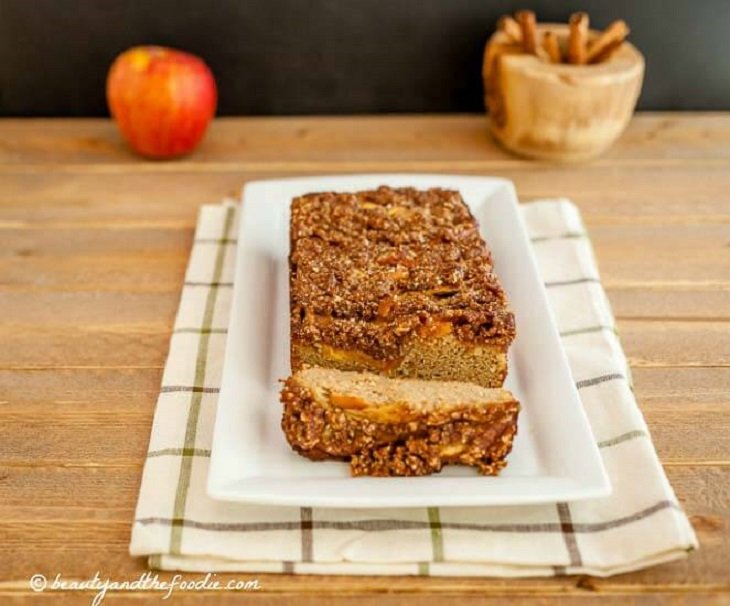 This loaf gives you the same lovely mix of apples and cinnamon, yet without the bother of making a pie. It makes a wonderful snack, breakfast idea or as a side for a barbecue or party. Adding applesauce to the actual loaf mix helps to keep the bread softer and adds a tang to the flavour. If you find this bread is a good addition to your recipe collection, then you could diversify and add walnuts next time.

This simple and quick recipe for a smoothie has been described as “apple pie in a glass” and it sure does! Imagine having that traditional flavour in a smoothie, without all the nasties! This smoothie takes only a few minutes to prepare and is a great way to give the whole family a great start to the day. The apple gives a tangy taste which is matched against the sweetness from the dates, and as we all know, dates give us slow-release energy too. 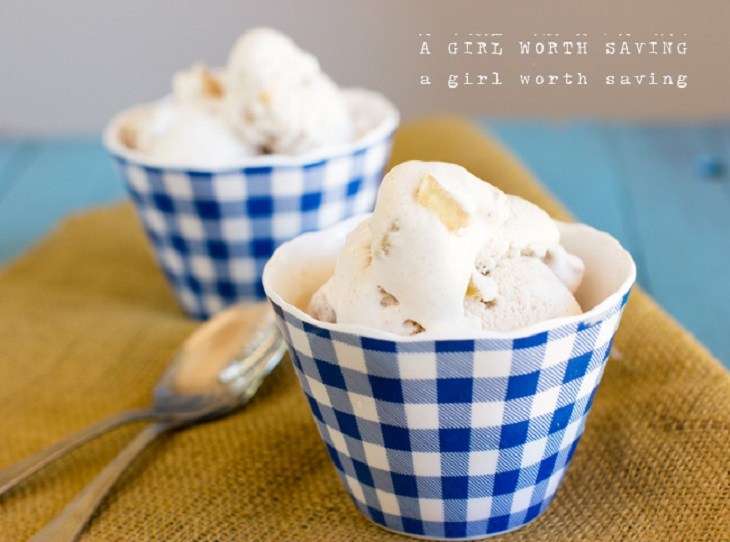 If you like ice cream then you will love this recipe! With the added spice from the pumpkin pie seasoning, the apple chunks give this dessert a fabulous freshness, and the whole dish tastes so indulgent! When you are cooking the apple, try not to overdo it as this can make the apple lose its texture, and for those of you who can eat them, why not top the ice cream with chopped nuts to make a sundae?

Although there are no nachos or chips in this recipe, that does not mean this is not a great dish! This would make a great addition to a sharing platter of dessert for a dinner party, or just to enjoy as a snack. Here is a little tip to try in the future when you make this again – soak your raisins in a brew of your favourite tea for around 20 minutes before using them and they become plump and delicious!