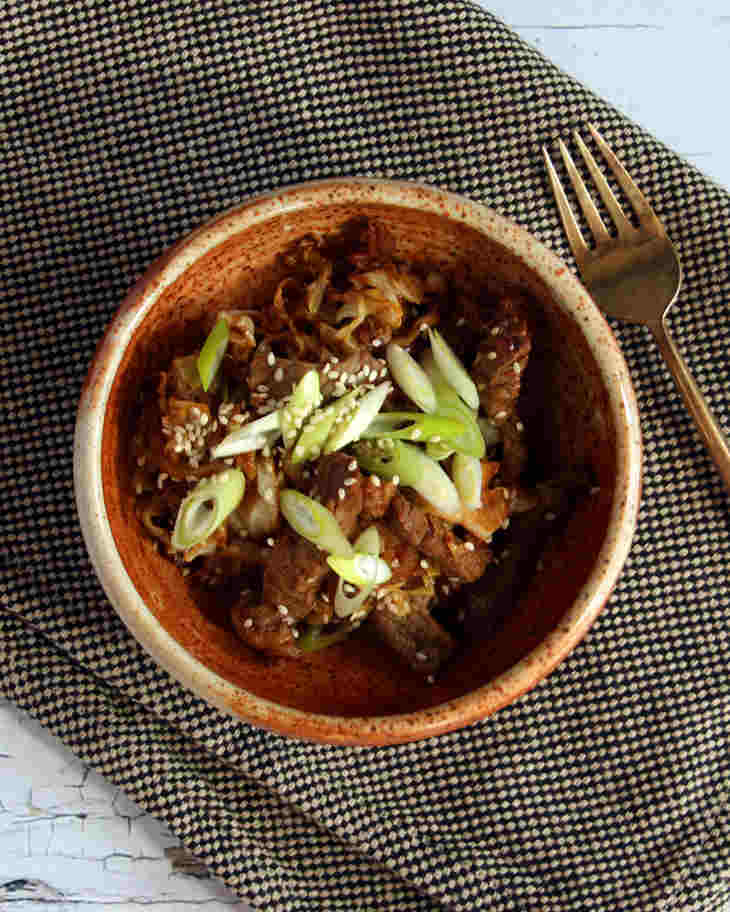 Stir-fry is typically an excellent option for Paleo, but there are ingredients that can muck things up. This Paleo beef bulgogi stir-fry recipe is super quick, easy, and safe for your diet.

Bulgogi is, in a word, delicious. But it’s also known as fire meat, as the thin sliced marinated meat is often cooked on the grill.

A Korean dish, it typically made with marinated strips of sirloin. The beef soaks up a blend of soy sauce, sesame oil, garlic, pepper, and sugar.

Onions and mushrooms have also been known to work their way into bulgogi dishes.

How I Made It Paleo

I love that stir-frys are so easy and simple to prepare. You can change up the meat, vegetables, and sauce to come up with different dishes all the time.

Variety is the key to a happy dinner table!

The other great thing about stir-frys is that they’re naturally Paleo. They are, after all, meat and vegetables.

But like most foods, people find ways to sneak in other ingredients in that are less-than-stellar if you’re Paleo.

White or brown sugar is a common culprit in stir-fry, especially teriyaki versions. We all love the sweetness, but can do without the sugar.

Instead, this beef bulgogi stir-fry calls for applesauce or honey.

Soy sauce is another ingredient to watch out for, as it generally contains gluten. I used gluten-free tamari sauce to get the same great flavor without the grain remnants.

Sometimes stir-fry contains corn. Many people mistakenly believe corn is Paleo, but it’s not. It may look all cute and yellow, but it’s harboring the same kinds of junk as grains, such as prolamins.

Here’s the in-depth story of why you shouldn’t eat corn.

Perhaps the most common issue with stir-fry, however, is what it’s served with. More often than not, stir-fry is served atop a steaming heap of white rice.

It’s not a good look for Paleo.

If you want the essence of rice with your stir-fry, you could serve this bulgogi version over cauliflower rice.

I just listed a multitude of ingredients that show up in stir-fry that aren’t Paleo. As it turns out, the more you learn about Paleo, the more you’ll realize that processed garbage ingredients tend to be in more places than you think.

That’s where knowledge is power. If you have a good sense of what foods are Paleo, and which ones don’t measure up, you can watch out for bad actors.

We love a good beef stir-fry and this one is sure to be a hit.