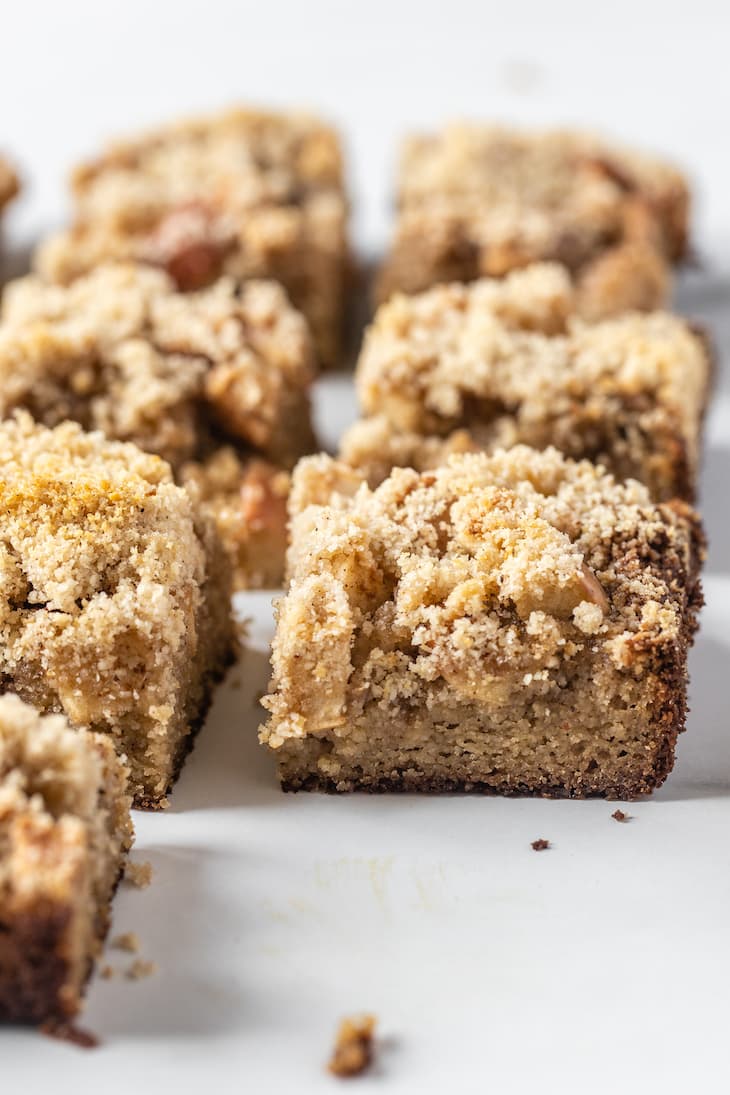 My Apple Cinnamon Coffee Cake is a delicious but not overly sweet cake that tastes like autumn but can be enjoyed any time of year.

The biggest misconception about coffee cake is that it contains coffee as an ingredient.

However, I’m here to dispel this myth and tell you that most coffee cake recipes don’t contain any coffee.

Actually, coffee cake gets its name because it is intended to be enjoyed with coffee. So, anytime you drink coffee, you can eat coffee cake.

Of course, you don’t need to be a coffee drinker to enjoy coffee cake. It is delicious on it’s own for a tasty snack or not-too-sweet dessert.

And it’s also delicious for breakfast! Even better, your non-Paleo friends will love it as well.

How I Made This Recipe Paleo

The most noticeable difference between my Paleo Apple Cinnamon Coffee Cake and traditional coffee cake recipes is that I do not use wheat flour.

Instead, I use a blend of almond flour and coconut flour.

Almond flour has become one of the most popular grain-free flours in Paleo baking. And unlike wheat flour, it’s completely gluten-free.

Almond flour is typically used in cakes and muffins because of its light texture when baked.

However, not all almond flour is created equally.

Be sure to buy finely ground almond flour for this recipe. Almond meal is much more coarse and will not result in a light coffee cake.

However, for the crumb topping, you can use finely ground almonds or almond meal since the crumb texture is naturally dense.

In addition to almond flour, I also used coconut flour in the recipe.

Coconut flour is simply coconut meat that has been dried and ground into a flour. And just like almond flour, coconut flour is naturally grain-free and gluten-free as well.

Coconut flour is quite high in protein, which makes it highly absorbent of liquid. So, any recipe that uses coconut flour likely uses a lot of wet ingredients as well.

Coconut flour works best when it’s used with another flour as well for the best baking and flavor outcomes, which is why I used it with almond flour.

Coconut sugar is used as a replacement for traditional refined cane sugar.

Coconut sugar is made from the sap of coconut palm trees that is boiled down into a sugar. It has more nutrients than traditional cane sugar and has a taste similar to light brown sugar.

However, even though coconut sugar is better for you than cane sugar, it is still sugar. So, if you are on a sugar-free diet, coconut sugar should be avoided.

Applesauce is used to add moisture to the recipe due to the highly absorbent coconut flour. It also adds a slight apple flavor to the coffee cake as well.

However, I suggest using unsweetened applesauce to keep the coffee cake from being overly sweet.

Unsweetened almond milk is used instead of traditional dairy milk. However, unsweetened coconut milk, cashew milk, and many other non-soy plant-based milks work just as well.

Lastly, coconut oil is used as a non-dairy replacement for butter in this recipe. However, I suggest that you use refined coconut oil, which has a much more neutral flavor as compared to unrefined (or virgin) coconut oil.

And if you can’t get enough cake, here are 20 Indulgent Paleo Chocolate Cake Recipes that are sure to please your family and friends.

For the cinnamon apples:

For the crumb topping: