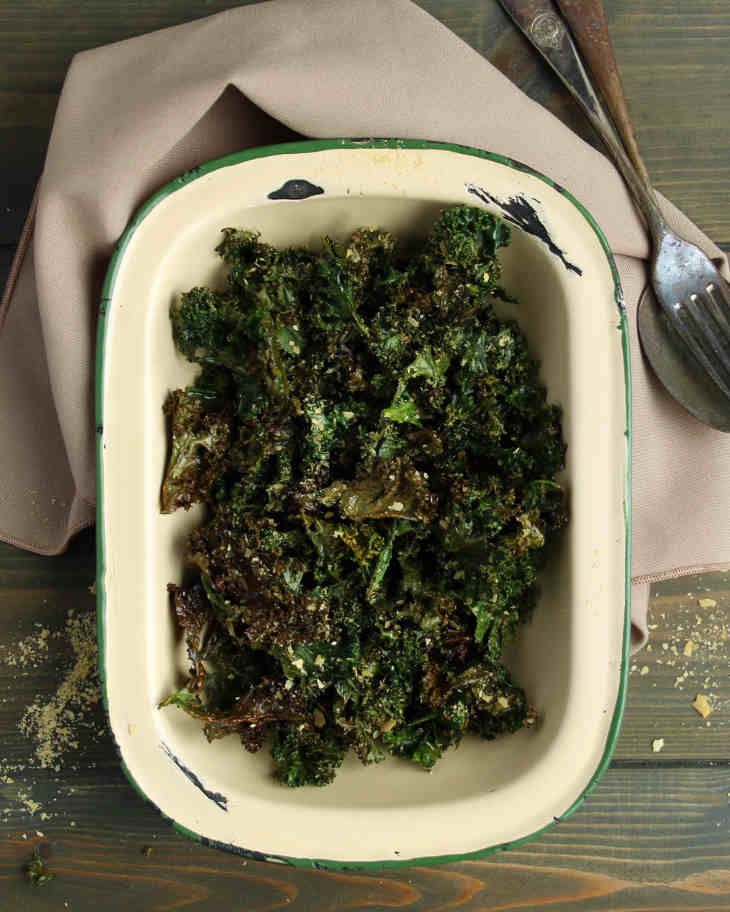 While there are many things you may be able to justify on a paleo diet, potato chips aren’t on the list. Make this paleo Parmesan kale chips recipe to satisfy your craving for something crunchy and salty.

Chances are if you’re at the grocery store, you’ll encounter curly kale. That’s just one of the reasons I picked it for this recipe.

I mean, it’s kind of hard to make something if you can’t find it!

Besides the obvious, curly kale crisps up nicely in the oven and makes an attractive snack. It has a woody stem, so I take the leaves off and discard the stem for this recipe.

If you’d like to try another form of kale, you have some options. Lacinato kale is a flat-leafed version that has a rumpled look. It also goes by Tuscan kale or dinosaur kale.

Baby kale is a good option for salad. It has a mild flavor that lends itself to raw consumption.

Siberian kale, on the other hand, should be cooked before you eat it. As its name implies, this hearty plant holds up well in the cold.

Redboor kale might win the beauty contest. It’s reddish leaves and purple stems and veins are definitely eye-catching. It often finds a home in ornamental gardens.

Those are just a few of the kales you might encounter. But again, don’t sweat it if your grocery store kale isn’t labeled. It’s probably curly kale and it will be great in this recipe.

This recipe includes an ingredient that you may not have in your pantry: nutritional yeast.

If you don’t have it at home, you’ll probably start keeping it in stock after making these kale chips.

Nutritional yeast is super versatile, and you can use it on pretty much anything you want to give a cheesy taste.

These little flakes aren’t going to give things a cheesy texture like mozzarella cheese, but you get the flavor of cheese, which is important.

Some of the most delicious foods contain dairy, which can be disappointing for those dipping their toes into a paleo diet.

But what you probably don’t know when you’re first starting out with paleo is that there are a number of workarounds you can do in your cooking and baking to get the taste of dairy without milk and things derived from milk.

Here’s a really handy article on paleo substitutions for dairy. I hope it helps you to stick with your paleo diet and enjoy it a lot more!