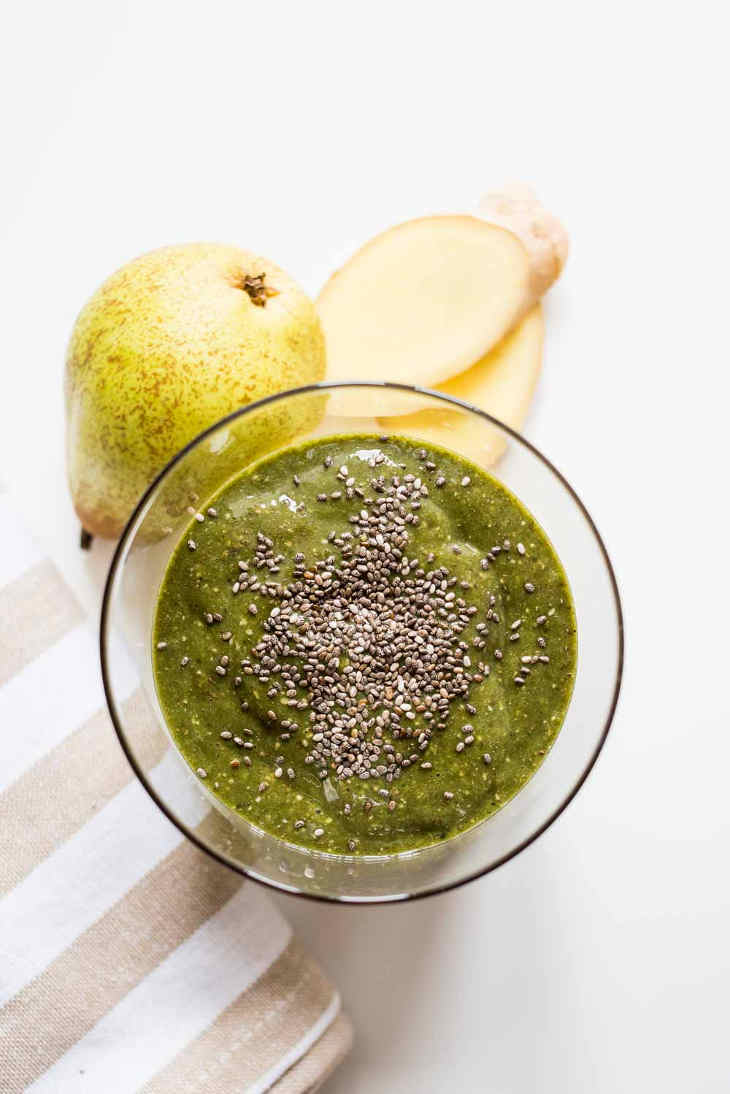 Nothing beats a cool refreshing smoothie in the heat of summer. Start your busy day off right with this quick-prep Paleo pear ginger green smoothie.

We all know spinach is a superfood. On the other hand, most people aren’t inclined to want to drink it.

Despite what Popeye might tell you, all of those nutrients come in a rather bitter package. That’s to be expected in a salad, or perhaps wilted down and mixed with your scrambled eggs.

But in a smoothie? Not a great selling point.

The key to having your greens and liking them too is finding a balance between sweet and bitter. You know the greens will have a little edge, but adding fruit can change the taste dynamic and make things palatable.

For this Paleo pear ginger green smoothie, banana and almond milk help cut through the taste of spinach. A pear follows the green theme and gives another fruity counterpart to the spinach.

The final ingredient is grated ginger.

These days, when people bring up the term “ginger” they’re rarely talking about the spice. But they should be. It’s got some great things going for it.

Ginger contains gingerol, which offers excellent antioxidant properties. In fact, some studies have indicated a positive link between ginger consumption and relief of arthritis or muscle pain.

And have you ever been told to drink ginger ale to calm an upset stomach? You’re not alone. Ginger has long been used as a remedy for digestive troubles. It has been particularly helpful in alleviating morning sickness for many pregnant women.

To reap the maximum benefit, select fresh ginger and grate it yourself. Ginger will last up to three weeks in the fridge (as long as it’s unpeeled) and up to six months in the freezer.

With ample fruits, veggies, and no added sugar, smoothies are perfectly Paleo — at least the ones you make yourself. And there are countless recipes out there to help you find the version or versions you like best.

Each recipe has been taste-tested and carefully constructed to include only Paleo ingredients. Enjoy!

This delicious green smoothie is packed with nutrients and flavor that will keep you going all morning.