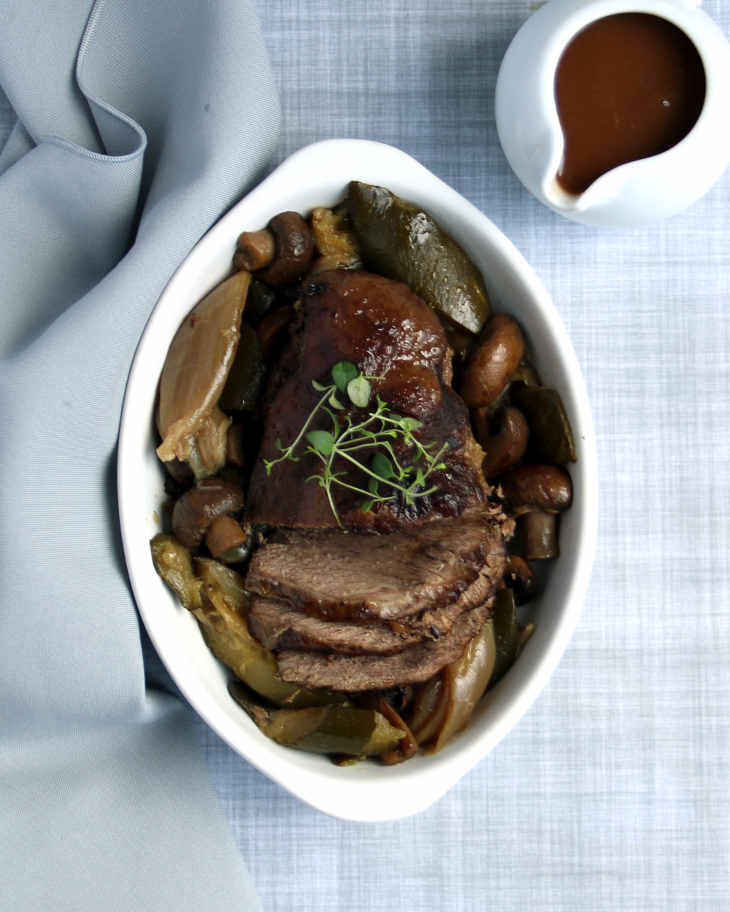 Nothing says Sunday dinner quite like pot roast. It’s the whole package, juicy beef, tender veggies, and a delicious savory gravy. If you find yourself missing pot roast now that you’re Paleo, we’ve got good news. Our Paleo pressure cooker pot roast is here to save the day, and the Sunday dinner! Not only does out version cut out the potatoes, for a Paleo-friendly take on the dish. It also cooks in a fraction of the time by making use of the pressure cooker. A delicious and diet-friendly pot roast on the table in under an hour might seem too good to be true, but try our recipe once and you’ll be a believer!

A Short History of the Pot Roast

It probably won’t surprise you to learn that pot roast has roots in Europe. Specifically, with a classic French dish called boeuf à la mode, which translates to “beef in style.” This is a way to prepare tougher cuts of beef in which the beef is browned, then cooked very slowly until tender, with root vegetables, herbs, and red wine.

French immigrants introduced this cooking method to America by way of New England. Later, Jewish immigrants brought their own variations from Eastern Europe. Pot roast endured as a hearty dish that makes use of a humble cut of meat, becoming a staple comfort food dish in households all across America.

Chuck roast is one of the traditional cuts for pot roast. It comes from the front shoulder of the cow, which is also commonly used for ground beef due to its toughness. In addition to chuck roast, you can also get shoulder steak, which is taken from the same area.

It is important to find a tough cut of meat for pot roast because of the traditionally long cooking time. So look for a cut that has a lot of connective tissue, which will translate into a tender final product. Other good candidates include brisket, bottom round, and rump roast.

More Paleo Pressure Cooker Recipes That Are Ready in a Flash

If you can’t get enough of your pressure cooker, there’s more where that came from. Check out this list of more than 60 AIP and Paleo pressure cooker recipes!

A classic pot roast to comfort you on a cold night and not hurt your diet.

Instead of discarding the juices left in the pressure cooker, you can strain it and use it as a base for a gravy or freeze to use another time.