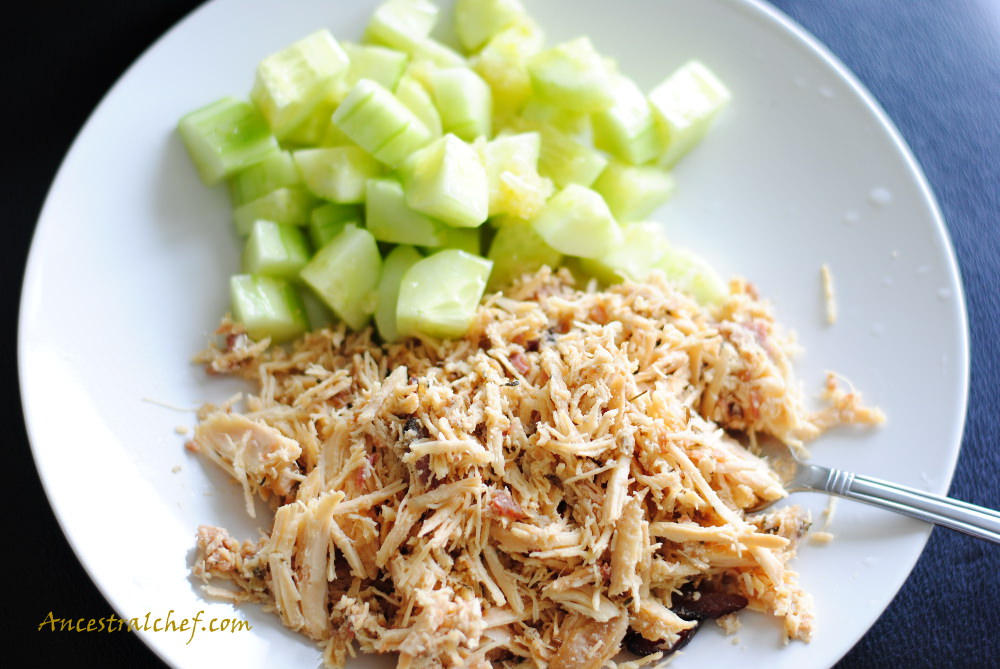 I had a bunch of uncooked bacon left over from when I made the avocado bacon explosion, and I wanted to use it in a dish that didn’t involve frying more bacon!  And so I turned to the slow cooker.  But what would it go well with in the slow cooker, I pondered…chicken!

I always find chicken breast rather dry (I wasn’t even all that impressed with the white meat of Thomas Keller’s Poulet Roti!), and so I thought the fat from the bacon would help moisten the chicken.  I was not wrong.  The bacon (and the olive oil) kept the chicken moist and flavorful! 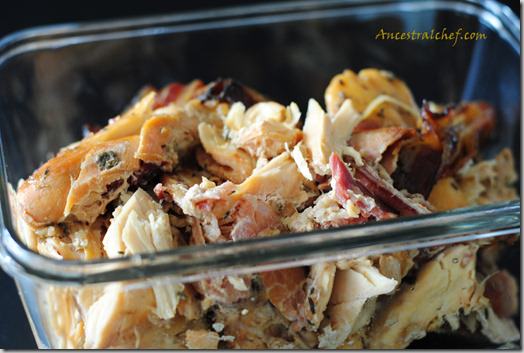 Then I shredded the meat and added a bit more olive oil. 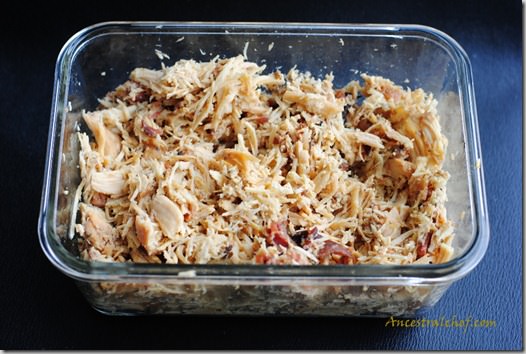 I served it with a simple but refreshing cucumber salad (recipe here), which went really well with the shredded bacon & chicken. 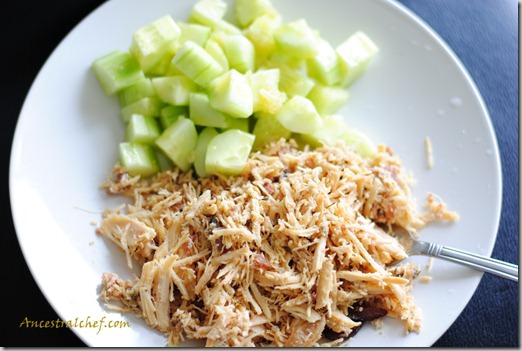 This looks great. The best olive oil ever though is Ariston.

Sounds good. Do you chop the bacon first or throw in whole strips?

You can do either 🙂

Made this tonight. Was so moist and delicious. Best part? It’s Paleo! Adding to the rotation for sure!

Glad you enjoyed it 🙂

Did you use boneless breasts?

How many servings will this make? Enough for an average 4 person family?

Made this overnight! Turned out OK, but next time I won’t add the tablespoon of salt. I think the salt from the bacon would have been enough.

Seems like this would need some kind of liquid to keep from getting dry?

The olive oil keeps it from drying out.

The olive oil and the fat from the bacon keeps it from drying out.

OMG!!! Coming home to the smell of dinner all done was priceless!!! Kids even asked for more!! ok ok I’ll stop with the exclamation points but thank you so much for this super easy super yummy recipe..

So glad it was a huge hit!

I just put this in the crock pot. Will let you know how it turns out!

Super jazzed to make this for dinner this coming week! Just to be sure, you put raw strips of bacon in the crockpot, not ones that are already cooked, correct?

Made this today and it was super easy and delicious. I will definitely be making this again and again.

What do you serve this with/on ither than cucumbers?

Is it possible to do 4 hours on high?

It varies depending on the slow cooker (as different ones have different “high” temperatures). I would put it on for 4 hours, and then see if the chicken and bacon are tender – you should also check with a meat thermometer in case they’re not done yet. Personally, I think you might need 6 hours on high (but again it varies with slow cookers).

My boo and I love this recipe so much! It was recommended by a coworker and I couldn’t wait to try it out! We just throw it on a nice bed of greens and lunch/dinner is served! So perfeect to take to work too. Thanks for the delicious noms!

Oh my goodness… this looks a-ma-zing! Free range organic chicken breasts are ridiculously expensive here in New Zealand ( 5 would cost around $30!), but whole chickens not so much. Do you think this would work just as well with a whole chicken? I can’t wait to try this!

Yes, it would, but be careful with the bones! I’d also cut up the chicken so it cooks more easily.

Made it. Loved it. So easy and yummy. Thank you.

Fantastic! Glad you liked it 🙂

Hate breast mainly cause it’s so dry might try what about thighs?

It should work fine with chicken thighs (the bacon and the olive oil help to make the chicken breast a lot moister).

This looks wonderful, I’m going to make it tomorrow!

Tell me, how thickly sliced is the bacon that you use for it?

I usually use thin-sliced bacon, but any kind should work ok 🙂

Hi! Is it possible, i.e. will it taste as good, if I use uncured bacon (sliced pork belly)? Thanks.

Yes, it should be fine if you mean bacon using natural nitrates when you say uncured bacon. If you mean just sliced pork belly (ie with no other ingredients in it), then you might need to add some salt to the dish.

I don’t have a slow cooker but can do it in a Dutch oven in a low heat oven. Would the olive oil be enough? And how did you shred the meat? Just finely cut?

Hi Riette – I think you might need to add a bit of broth for the dutch oven (as it loses more liquid than the slow cooker). I’ve never tried it that method, so I can’t be sure how it’ll turn out. I only shred the meat after it’s cooked – then it’s pretty easy with 2 forks.

Why shred it? To me it’s more appetizing looking in the chunks in the pre-shred picture. (Maybe a matter of personal choice?) Also do you just use the chicken and discard the bacon?

I like it shredded because then there’s more flavor as chicken can be a bit bland and dry in large chunks. But this is just personal preference. I eat both the chicken and the bacon together – nothing gets discarded.

I’ve made this once per the instructions and it was amazing! This week I’m going to make it again for a potluck and am going to use a whole chicken -do you think the servings will be the same?

I think it should be about the same if you use a large chicken (just make sure to debone carefully).

I discovered and made this recipe for the first time a week ago, and it was a revelation! This is simple, clean cooking at it’s best, and it is absolutely delicious. Last week I ended up eating the chicken on its own, but also making romaine lettuce wraps with some guacamole, which was excellent. I’m preparing it again today and will be experimenting with adding some of the shredded chicken to a soup I made with roasted butternut squash, coconut milk and toasted pepitas. I was also thinking about a paleo shepherd’s pie with this as the base… Anyway, thanks for this!! One of my hands-down favorites of 2014!!

Fantastic – thanks so much Hilary!

Can you use frozen chicken for this? I just came across this today on Pinterest and it looks so good

Your not suppose to put frozen chicken in the crock pot, something about it slowly defrosting and cooking can develop bacteria easily. I have done it several times in my cooking life before reading up on it, but I don’t anymore 🙁

Thanks for sharing that advice Rachel!

Hi in your paragraph you said 2 tablespoons of rosemary and in the recipe it says 1..just wondering which is correct? I used 2…recipe sounds amazing and my boyfriend said it smells wonderful so hopefully it turns out.

Apologies Bonnie for that typo – although if you use slightly more of any of the herbs, it doesn’t make too much difference 🙂 I used 1 tablespoon of rosemary, and I’ve corrected the text to reflect that. Thanks for pointing out that inconsistency!