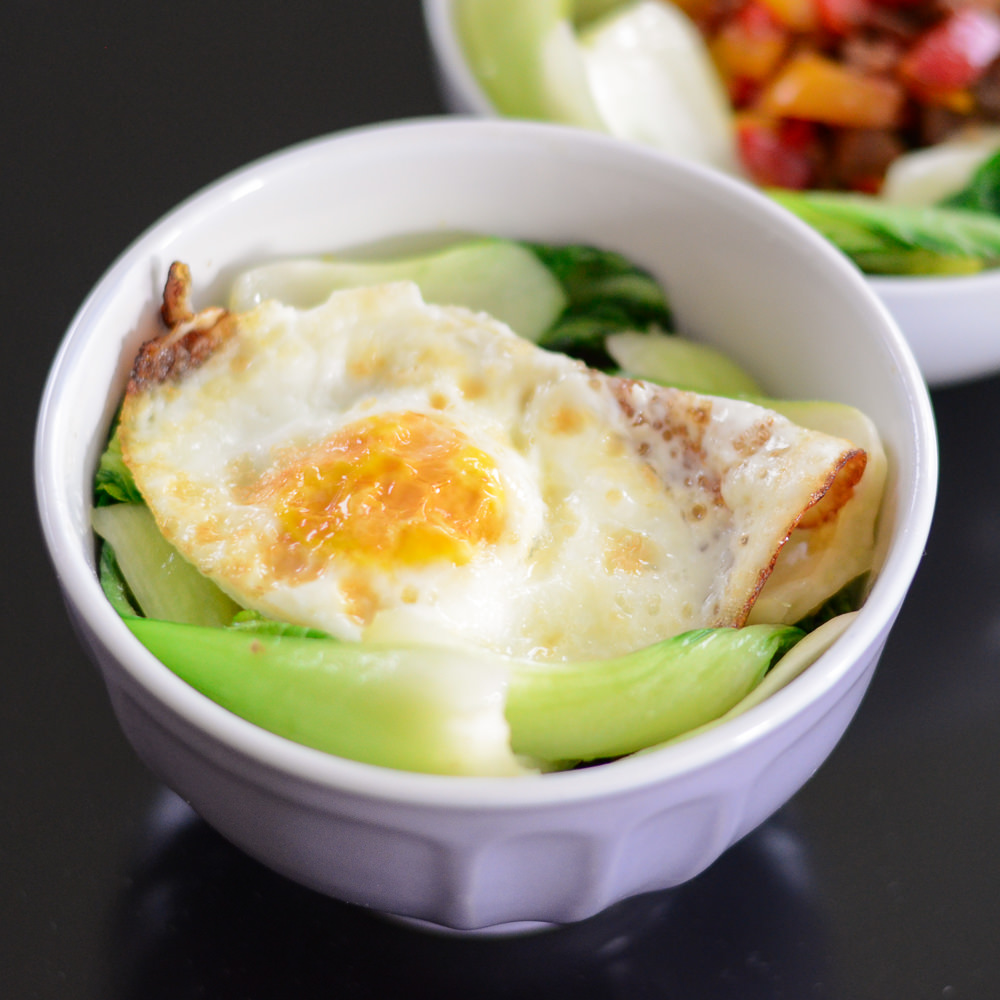 This is definitely a bit of an unusual dish, which was created after staring into the fridge for a long time! I wanted to marry Eastern and Western cuisines, and this is what I managed to come up with. It was so much more delicious than I had anticipated, and everything went really well together. And to top it off, it’s highly nutritious (with beef, veggies, and an egg) and easy to make.

So, I started by dicing 2 bell peppers.

I heated up a pan with a bit of coconut oil in it and dropped the diced bell peppers into it. 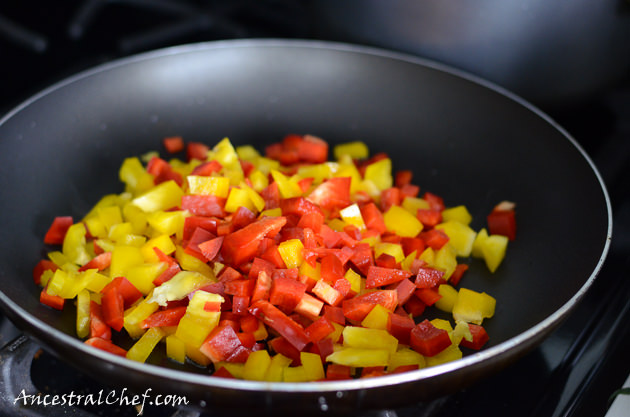 While the peppers were cooking, I chopped up 2 burgers into little cubes. I had some burgers ready cooked in the fridge, but if you don’t, then you can use minced meat instead. 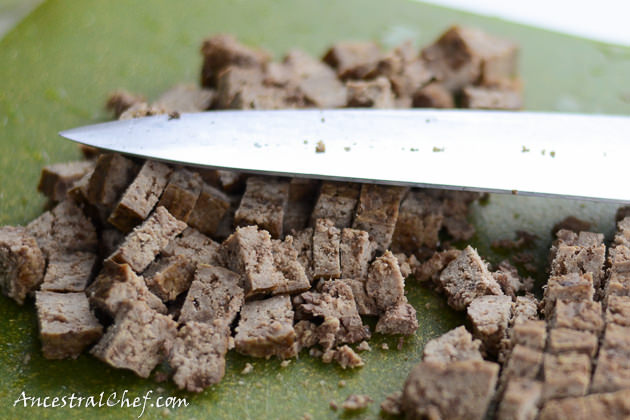 Then I placed the diced burgers into the pan with the peppers and stir-fried them together. I also added some tamari sauce (can be substituted with coconut aminos), chili powder, red chili flakes, salt, and black pepper.  Read this article for why tamari sauce is Paleo. 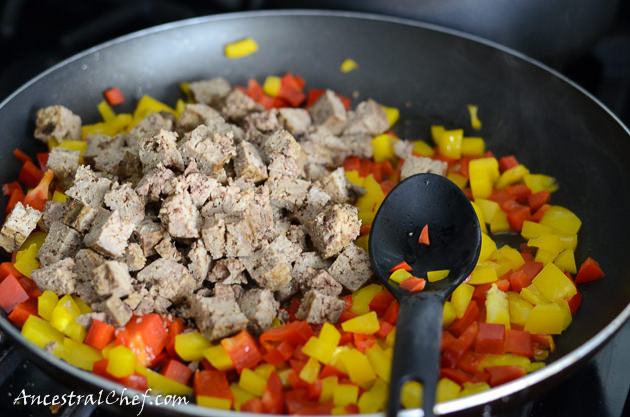 While the bell peppers and burgers were gently cooking away, I got 6 small bunches of bok choy and washed them and chopped off the ends. Then I pulled the leaves apart and placed them into another pan with coconut oil to stir-fry. 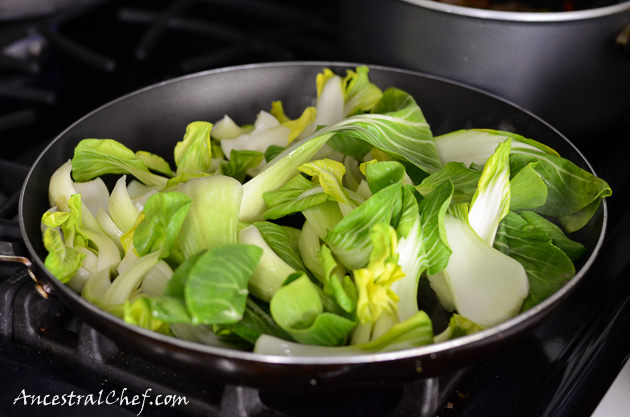 I let the bok choy cook for a bit on a medium heat until the leaves started to look wilted. Then I grated some fresh ginger into it and sprinkled a bit of salt on it. 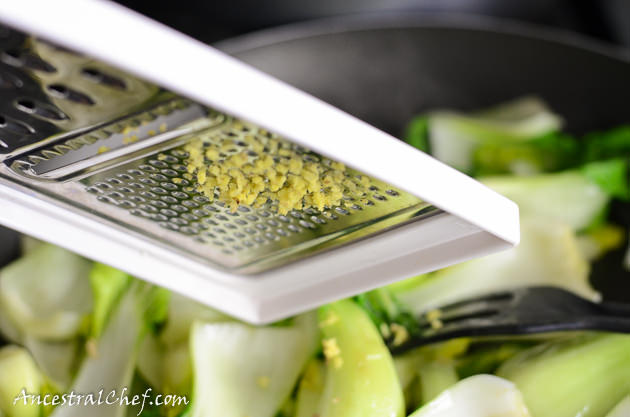 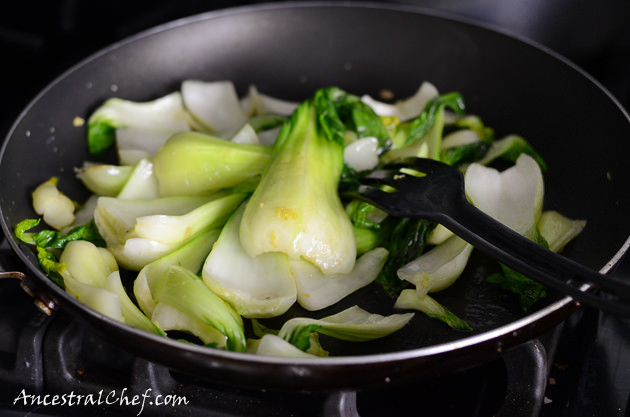 The last ingredient for this dish is a fried egg, which seemed fitting since I was making this for a late brunch. 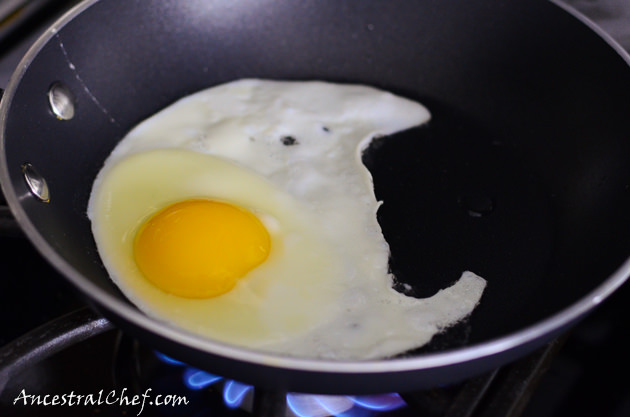 I put everything together in a medium sized bowl. The bell peppers and burgers went in first. 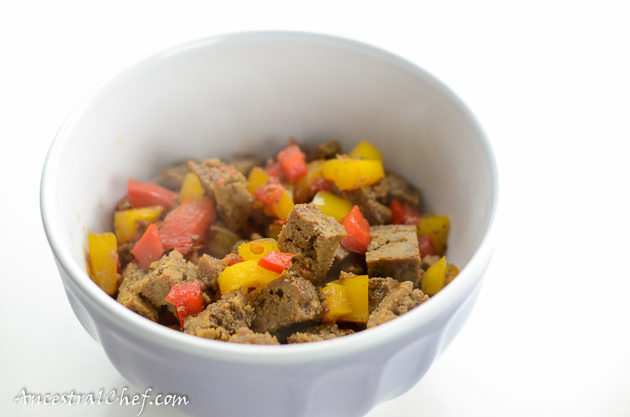 Next, I put bok choy around the edges of the bowl on top of the bell peppers and burgers. 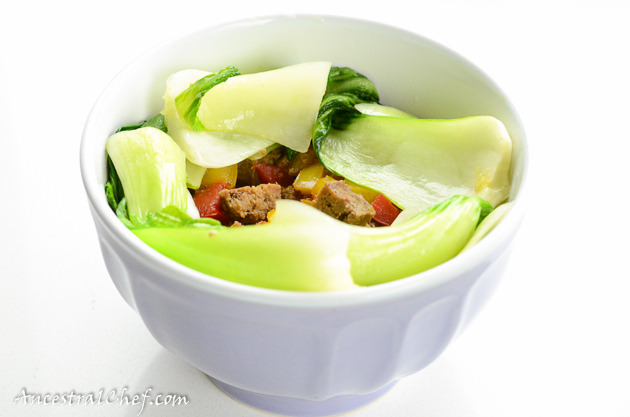 Then the egg went on top, like a lid. 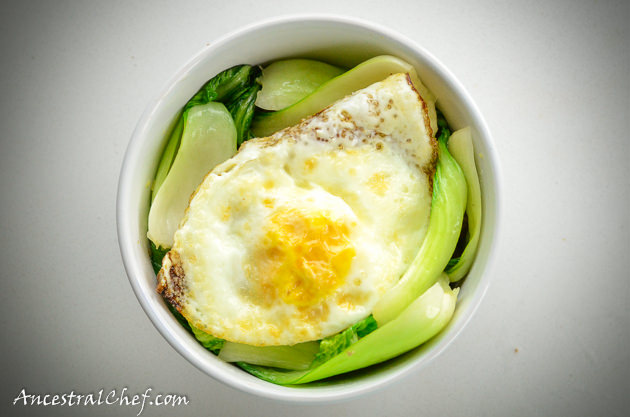 It was really delicious, and both J and I ate our bowls in no time at all! The chili powder and red chili flakes added a nice kick to the stir-fry at the bottom, which contrasted with the ginger taste of the bok choy and the more mild taste of the egg. This is definitely something I am going to make over and over again! 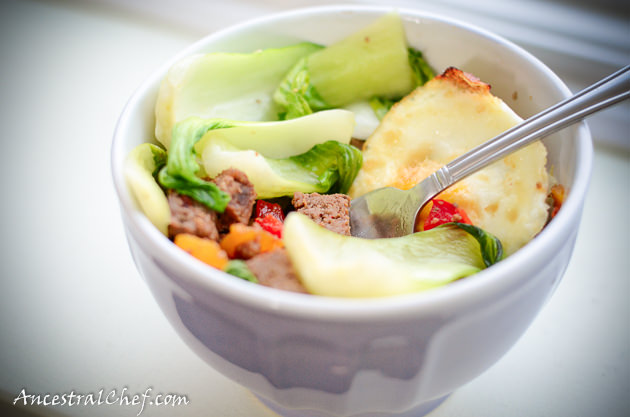 For the Burger Stirfry:

For the Bok Choy:

For the fried eggs:

For the Burger Stirfry:

For the Bok Choy:

For the Fried Egg:

This looks delish! Adding this to my to-try list thanks.

Thanks C McKane! Let me know how it turns out!

I keep running across your blog on here and I gotta say this is one of my favorite recipes I have seen by you on here. I don’t know what it is about it, but its just really beautiful. I love the simplicity of it. Its not to stiff or organized in fact its a little messy which gives it a really unique touch. I have never felt this way about a recipe before but to be hones this really is quite a beautiful recipe and shows a lot of character from you. I am definitely going to try this, and I will let you know how it goes. Thanks for the recipe. Looking forward to more posts from you.

Hi Joshua, I’m so glad you like the recipe, and I would love to hear what you think when you try it! I’ve checked out your blog before, and it’s just filled with amazingly beautiful photos of food. I’ve actually got your blog on my list of Paleo recipe blogs: https://paleoflourish.com/paleo-websites-blogs/