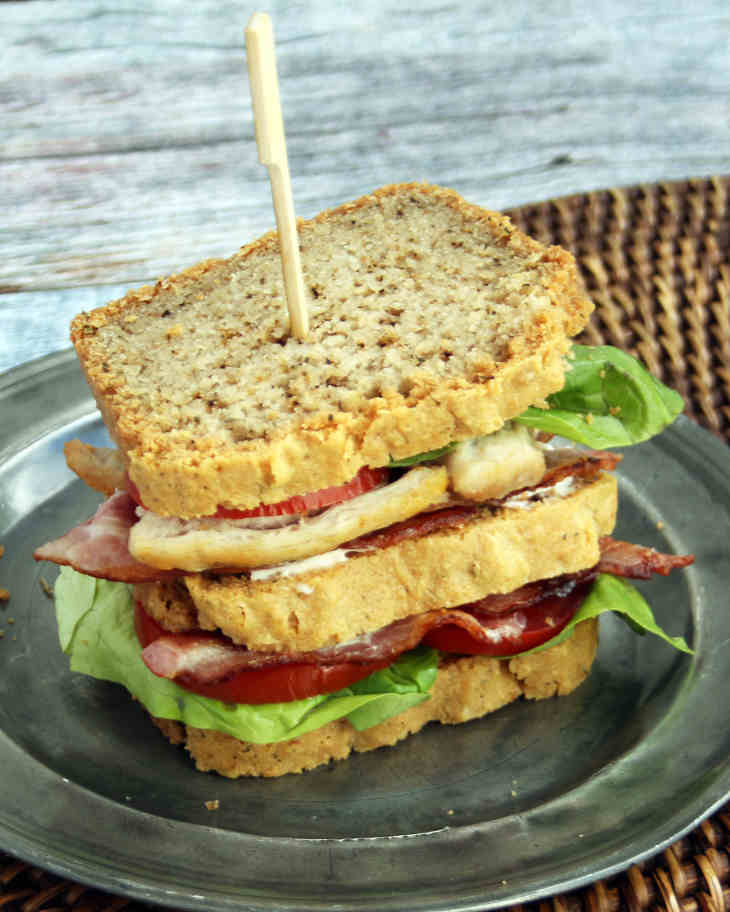 Lettuce wraps are fine and all, but sometimes you just want a more substantial sandwich. This Paleo club sandwich recipe is the real deal.

That’s mostly because of the bread. It’s very enticing, piled high with layer upon layer of goodness. But that tasty bread is full of grain.

Since we don’t do grain on Paleo (and no, whole grains aren’t cool either), a substitute is necessary. This Keto bread is an awesome option.

It’s grain-free and Paleo, but takes about an hour to bake. Just a quick head’s up to start this recipe before you’re hungry!

It’s possible to make grain-free bread by using alternative flours. This bread calls for almond bread and whey protein powder. You’ll use coconut oil for fat and coconut milk instead of any dairy.

Many club sandwiches are toasted, and you could certainly toast your bread if you’re so inclined.

I think this gives you the best of both worlds. You still enjoy a light and soft loaf of bread, but don’t scarf up grains.

The meat is another potential issue. Some deli meats have added sweeteners or preservatives you might not want to eat. While this recipe calls for chicken breast, if you’d prefer to use lunch meat just make sure to check your labels.

Finally, I did not include mayo in this recipe, but you could certainly use some Paleo mayo if you’d like. Watch out for added sugar or vegetable oil.

What to Serve With Your Club

When I think of a club sandwich, I automatically picture fries or chips on the side. While that’s not an option for Paleo, there are a lot of delicious side dishes you can make instead.

If you’re in a fry state of mind, try these Paleo zucchini fries. They’re a perfect complement to this sandwich.

You could also try one of these 30 Paleo soups. The chicken soup could be a winner!

Garlic-roasted Brussels sprouts are another option to pair with a club sandwich. You might actually like them more than the sandwich, if that’s possible!

If those don’t suit your fancy, check out a whole lot more on this page of Paleo side dishes.

Why You Shouldn’t Eat Grains

I showed you a detour for bread in this recipe with the Keto version, but you may be wondering if it’s worth the time to bake your own bread.

After all, how bad could a store-bought loaf be? It’s your decision of course, but I urge everyone to really try giving up grains. Once you start reaping the benefits, you’re more likely to get on board with ditching them for good.

Enjoy clean eating all the way with these triple-decker club sandwiches.