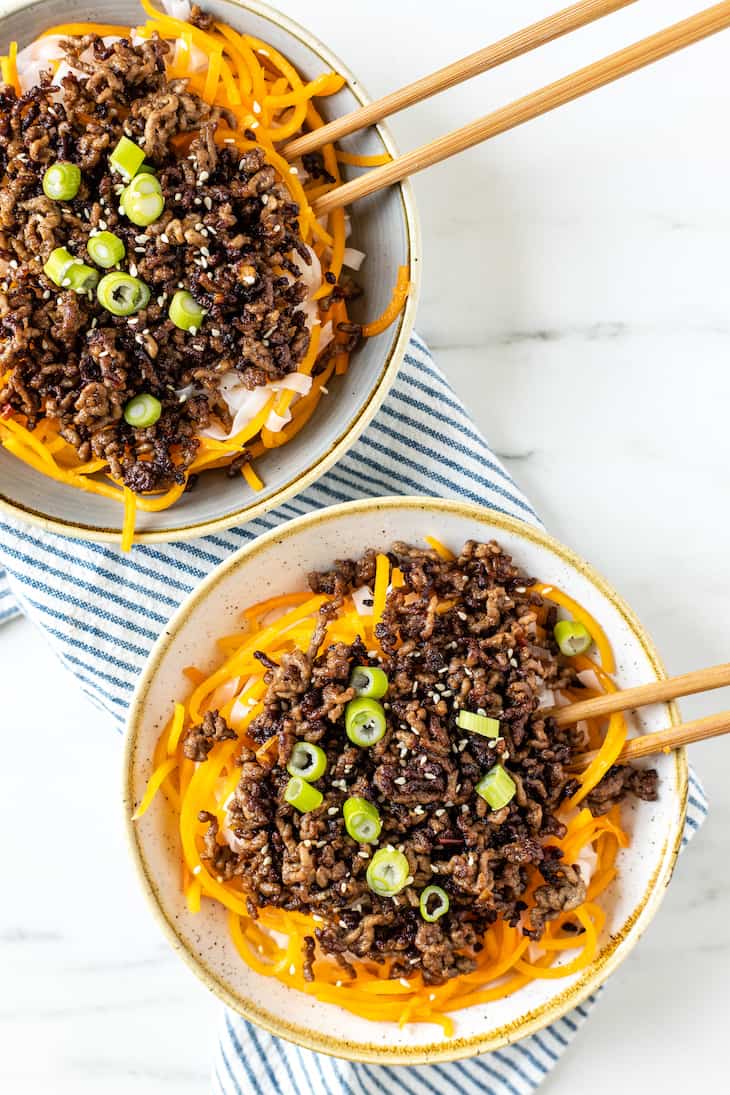 My Paleo Korean-Style Beef and Noodles Recipe is a delicious spin on a traditional dish, and it’s made using easy-to-find ingredients that are readily available in stores or online.

And it’s ready in about 30 minutes and even less if you purchase the butternut squash already made into noodles or if you make the noodles in advance.

Even better is that the recipe is completely Paleo so you don’t have to worry about iffy ingredients that are usually found in takeout.

And the best part is that this is a recipe that your entire family will love!

The first that you might have noticed was that I used shirataki noodles and butternut squash “noodles” instead of cellophane or rice noodles, which are common in Asian recipes.

Shirataki noodles,  also called konjac noodles and miracle noodles, are made from the fiber that comes from the konjac plant’s root. Shirataki noodles have exploded in popularity in the past few years because they are high in fiber but low in carbs and calories.

If you’ve never tried shirataki noodles, don’t be put off by their smell when you open the package. Simply rinse the noodles and boil them for 2 to 3 minutes before using them, which will get rid of the fishy aroma.

But don’t be intimidated by the thought of making your own! Simply cut the bulbous end and the stem, which leaves the neck of the butternut squash.

Peel the neck and spiralize or use a vegetable peeler to make long, noodle-like strands. You might need to cut the neck into several smaller pieces to make it easier to handle.

Another ingredient that you won’t find in the recipe is soy sauce, which is made from wheat and soybeans, and isn’t considered Paleo. Instead, I used gluten-free tamari sauce and coconut aminos to give the dish a rich flavor.

If you don’t have gluten-free tamari sauce, you can use just coconut aminos instead, but you might need to add a bit more salt to the dish at the end.

However, if you don’t have coconut aminos, you can omit it from the dish, but you might need to add a bit more coconut sugar to balance the saltiness of the gluten-free tamari sauce.

Another ingredient I used to make the recipe Paleo was coconut sugar instead of traditional cane sugar. Similar to coconut aminos, coconut sugar is made from coconut sap that has been dried and ground into sugar.

While coconut sugar is slightly better for you than traditional sugar due to the trace amounts of minerals in it, it is still sugar and should be used sparingly. If you want, you can omit the coconut sugar completely for a slightly less sweet dish.
And be sure to check out all of my Paleo Asian recipes where you can find plenty of recipes to tempt your tastebuds without ruining your diet.

Spicy with just a hint of sweetness, this Paleo Korean-Style Beef and Noodles Recipe will quickly become a family favorite.