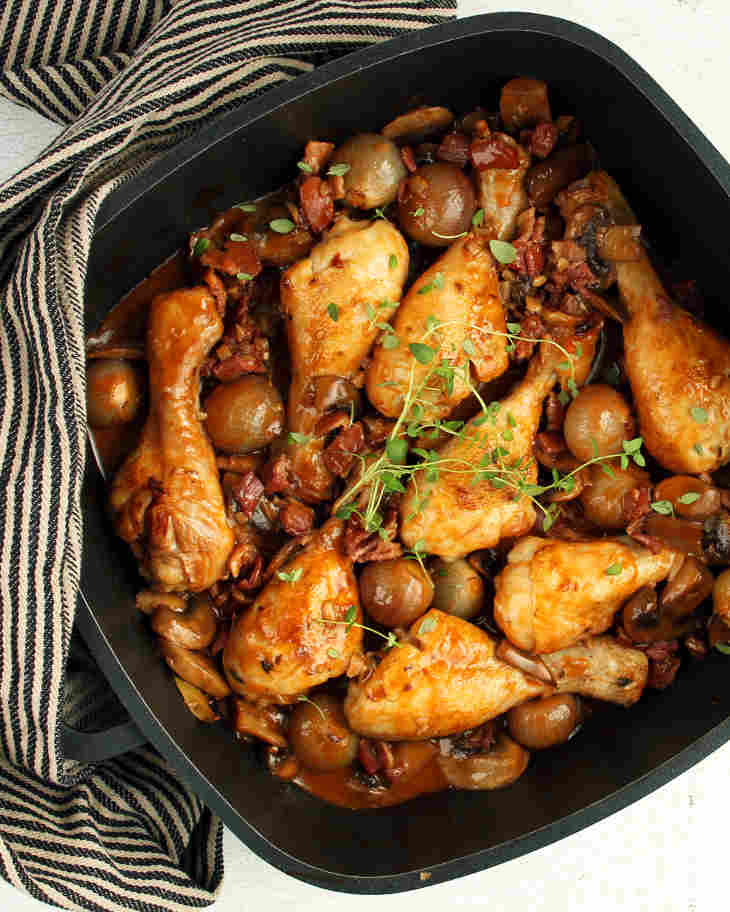 I love cooking with chicken because it is so versatile. From simple home cooking to fancy meals, perfect for date night or dinner parties, chicken can do it all. This Paleo coq au vin, falls somewhere between the two. It’s meaty and satisfying enough to serve to your family but fancy enough for a special occasion with red wine and smoky bacon. Don’t let the long ingredient list or the multi-step cooking process scare you away, this is a classic recipe and it isn’t hard to make. The flavor is well worth any extra steps and this dish will be on your table in under an hour, including prep. Not bad for a dinner party! So why not whip up a batch of cauli rice while you wait for your chicken to cook and set the table for a crowd.

Get the Scoop on Coq au Vin

Coq au Vin simply means rooster with wine in French. The recipe was not documented until the 20th century but there is evidence that it existed in different forms dating back as far a Gaul and Julius Caesar.

Coq au Vin was popularized in the United States by celebrity chef Julia Child. Child wrote about coq au vin in Mastering the Art of French Cooking and demonstrated her technique on her TV show The French Chef. Coq au Vin quickly became regarded as one of her signature dishes and she is credited with introducing people across the country to this classic French dish.

From Classic to Paleo: How We Transformed this French Dish

Some dishes require a lot of substitutions to be Paleo. Coq au vin is not one of them. In fact, the original dish uses mostly Paleo-friendly ingredients.

The biggest obstacle is that coq au vin is traditionally thickened with a roux. In our version, we bypass the roux, and any substitution, choosing to reduce the sauce instead. This method takes a little longer but it concentrates the flavor and keeps the sauce grain-free!

The other sticking point comes with the accompaniments. Coq au vin is often served with rice or potatoes, neither of which is Paleo-friendly. Luckily, cauliflower rice or mash would be delicious here, or even this Paleo root vegetable mash.

Or for more ideas, check out this list of 35+ Paleo recipes for chicken thighs!

A classic dish with a rich sauce that we recommend soaking up with cauli-rice.